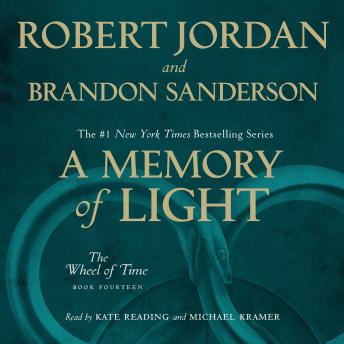 A Memory of Light: Book Fourteen of The Wheel of Time

With Robert Jordan’s untimely passing in 2007, Brandon Sanderson, the New York Times bestselling author of the Mistborn novels and the Stormlight Archive, was chosen by Jordan’s editor—his wife, Harriet McDougal—to complete the final volume in The Wheel of Time®, later expanded to three books.

In A Memory of Light, the fourteenth and concluding novel in Jordan’s #1 New York Times bestselling epic fantasy series, the armies of Light gather to fight in Tarmon Gai’don, the Last Battle, to save the Westland nations from the shadow forces of the Dark One.

Rand al’Thor, the Dragon Reborn, is ready to fulfill his destiny. To defeat the enemy that threatens them all, he must convince his reluctant allies that his plan—as foolhardy and dangerous as it appears—is their only chance to stop the Dark One’s ascension and secure a lasting peace. But if Rand’s course of action fails, the world will be engulfed in shadow.

Across the land, Mat, Perrin, and Egwene engage in battle with Shadowspawn, Trollocs, Darkfriends, and other creatures of the Blight. Sacrifices are made, lives are lost, but victory is unassured. For when Rand confronts the Dark One in Shayol Ghul, he is bombarded with conflicting visions of the future that reveal there is more at stake for humanity than winning the war.

Absolutely perfect ending to an excellent series. I could not stop listening!

Sanderson did a great job of salvaging the rambling storyline of Robert Jordan and giving the series a fitting ending. It had some holes and a few points of frustration, but overall it was well done.

I'm so happy I decided to undertake this amazingly epic series, but I'm sad I've made it to the end, Brandon Sanderson being one of my favorite authors has done a beautiful job finishing the series for Robert Jordan, "may the creator shelter him", after Robert Jordan's unexpected death. These two narrators are also my favorites. They do such a great job conveying the story. Thanks!

Incredible end to an epic series. Sanderson did an excellent job picking up where Robert Jordan left off. A Memory of Light is brings everything to a stunning conclusion that never drags despite its considerable length. It's been a great journey!

Brilliant read and brilliantly read. This brings the series to a superb end

Great narration! Using 2 speakers of different genders was really helpful for a novel with character point of views - especially when there are numerous characters who get POV chapters or sections. Inflections and emotions were expertly done, incredibly enjoyable experience!

I do not understand why the narrator randomly started using a British accent for Brigitta and Elayne.

I think I have read this series 9x in its entirety. I never get tired of this story, it is the greatest epic I have ever had the pleasure to read. I love this story, I feel connected to the characters. They are like old friends, their joy is my joy. Their sadness, is my sadness. The best series I have ever read.

A phenomenal read by the narrators. I felt immersed in the story the whole time and felt the emotions deeply. This is the best full fantasy series I have ever read and I was happy with how Sanderson finished it for R.Jordan (May he rest in the shelter of the Creator). I can't wait for a continuation of the Stormlight Archives.

A fitting ending to a thoroughly enjoyable series!

What a fantastic series, thank you Robert Jordan and Brandon Sanderson for that amazing journey.

Enjoyed the series. Sorry it had to end

This has been a great ending to a very excellent series. Really enjoyed it. Very well written. once again the narrators were excellent, they brought the characters to life. Made me feel like I was there.

A fantastic ending to this amazing series. Read exceptionally by the narrators who really bring the characters to life.

A wonderful read as expected. Sanderson and Jordan are always a pleasure. Sanderson seamlessly picked up where Jordan left off and I think Jordan would have loved what was done with his masterpiece. Reading and Kramer are like old friends now.

Just plain loved it. Glad for the conclusion. It tired them all together in the end.

The end of the series brings it all together and makes up for all the seemingly unending game of thrones boredom that dragged down the mid to latter books. Sanderson did an excellent job with the material.

I love wheel of time. at times the series got a little slow but it never failed to pull me back in!!!!!