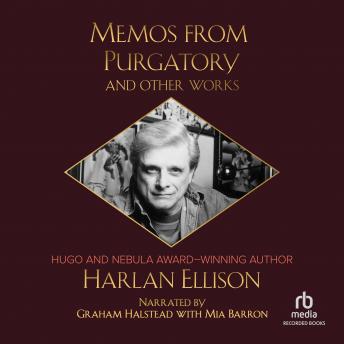 Memos from Purgatory and Other Works

From the Hugo and Nebula Award-winning author of Strange Wine: A gritty memoir of life in NYC that became the basis for a Hitchcock TV drama. This audiobook also includes Ellison's Children of the Streets. Hemingway said, "A man should never write what he doesn't know." In the mid -fifties, Harlan Ellison-kicked out of college and hungry to write-went to New York to start his career. It was a time of street gangs, rumbles, kids with switchblades, and zip guns made from car radio antennas. Ellison was barely out of his teens himself, but he took a phony name, moved into Brooklyn's dangerous Red Hook section, and managed to con his way into a "bopping club." What he experienced (and the time he spent in jail as a result) was the basis for the violent story that Alfred Hitchcock filmed as the first of his hour -long TV dramas. This autobiography is a book whose message you will not be able to ignore or forget.

Memos from Purgatory and Other Works