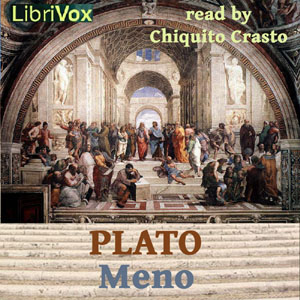 Meno (Ancient Greek: Μένων) is a Socratic dialogue written by Plato. Written in the Socratic dialectic style, it attempts to determine the definition of virtue, or arete, meaning in this case virtue in general, rather than particular virtues, such as justice or temperance. The goal is a common definition that applies equally to all particular virtues. Socrates moves the discussion past the philosophical confusion, or aporia, created by Meno's paradox (aka the learner's paradox) with the introduction of new Platonic ideas: the theory of knowledge as recollection, anamnesis, and in the final lines a movement towards Platonic idealism.. (Introduction by Wikipedia)