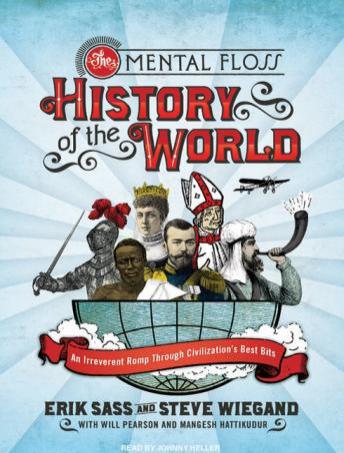 The Mental Floss History of the World: An Irreverent Romp Through Civilization's Best Bits

About 60,000 years ago, the first Homo sapiens were just beginning their move across the grasslands and up the ladder of civilization. Everything since then, as they say, is history. Just in case you were sleeping in class that day, the geniuses at mental_floss magazine have put together a hilarious (and historically accurate) primer on everything you need to know-and that means the good stuff.

Twelve core chapters of world history tackle everything from civilization's baby steps in the Fertile Crescent to the Not-Really-That-Dark-Unless-You-Lived-in-Europe Ages to A World United by Terror and TV. From the Golden Haemorhoids of the Philistines (punishment from above) to the likely namesake of the cartoon elephant Babar (a Mongol prince) to the most pressing language translation issues facing the menus of today ('carp' vs. 'crap'), all of history's most interesting bits have finally been handpicked and roasted to perfection.