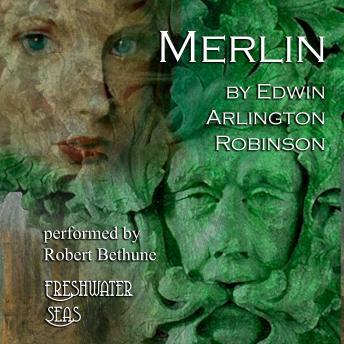 In "Merlin," Edwin Arlington Robinson delves into the minds and hearts of a gallery of characters from the story Camelot: Gawaine, Bedivere, Lamorak; Arthur himself; his fool, Sir Dagonet, and most importantly, Merlin himself and the woman he loves, Vivian. He places the action at the moment when Guinevere and Lancelot have fled to Joyeux Gard, and Arthur, goaded on by Modred and Gawaine, is reluctantly preparing an army to make war on them.

It is at this time that he needs the advice and support of his old mentor, Merlin, more than ever before in his reign and his life, but it is at just this crucial time that Merlin has found that the love of Vivian is more important to him than kings, wars, knights, or Camelot itself. Age has finally caught up to Merlin, and he knows he cannot give what Arthur needs to save and restore Camelot.

Robinson's focus throughout is on character. He does not give us jousts and quests. Rather, he gives us the quiet thoughts and conversations that turn the kingdom toward the final war, as each character tries to balance old loyalties, old dreams, old hopes and fears against new realities and new imperatives. Against that background, the sadness that is Merlin plays against the quick playfulness and hope of Vivian, leaving us with a new and remarkably touching view of the last days of Camelot.


A review by Conrad Aiken.
"In 'Merlin,' however, where Mr. Robinson's romantic alter ego, so long frustrated, at last speaks out, we can not for long doubt that he reaches his zenith as a poet. The sense of scene and portraiture are as acute here, certainly, but the fine actuality with which they are rendered is, as in the best poetry, synonymous with the beautiful; and the poem, though long, is admirably, and beyond any other American narrative poem, sustained. Merlin and Vivian move before us exquisitely known and seen, as none of the people whom Tennyson took from Malory ever did. It is one of the finest love stories in English verse."
-- Conrad Aiken, "The Poetry of Mr. E. A. Robinson," The Freeman, September 21, 1921, p. 48.