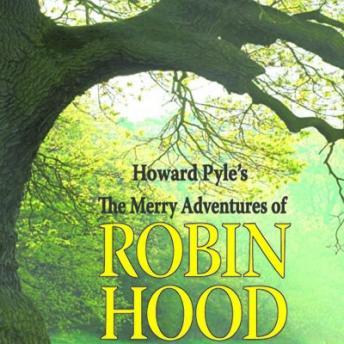 The Merry Adventures of Robin Hood

Howard Pyle's exciting and hilarious tales of Robin Hood and his merry band of Outlaws who reigned over Sherwood Forest doing many good deeds for the poor, and deserved misdeeds for the pompous and haughty rich.

AUTHOR
Howard Pyle was born on March 5, 1853 in Wilmington, Delaware. From the time he was a very small boy he loved pictures, especially the pictures in storybooks. Among his favorites were Grimm's German Fairy Tales and Arabian Nights. At the age of twenty-one, Pyle began to contribute illustrations and fables to St. Nicholas magazine and later went on to write and illustrate books for children. His first was The Merry Adventures of Robin Hood in 1883. Many more books followed, including Pepper and Salt; or, Seasoning for Young Folk, Otto of the Silver Hand, Howard Pyle's Book of Pirates, and The Story of King Arthur and His Knights. He also taught illustration at the Drexel Institute in Philadelphia and later set up his own art school in Wilmington. He died on November 9, 1911, in Florence, Italy.-Amazon.com

COMMENTARY
Reviews for Alcazar AudioWorks' production of The Merry Adventures of Robin Hood
Narrator David Thorn breathes fresh life into the classic tales of Robin Hood in this frolic through Sherwood Forest. A faithful rendition of his noble deeds displays the robber's timeless appeal, overcoming some archaic language and countless references to ale. The songs and ballads, ably performed by Thorn, add to the production's merit. Individual exploits within this extensive audiobook create plenty of stopping places, as listeners meander leisurely through medieval England. Thorn's booming voice chronicles the excitement of archery matches and skirmishes with the Sheriff of Nottingham, which make Robin Hood a perennial favorite with adventure lovers. Despite an unassuming package, this audiobook is a stirring retelling of a well-loved story. C.A. © AudioFile 2007, Portland, Maine [Published: JUN/ JUL 07]

Jolly good
Having read, listened to, and viewed multiple versions of the Robin Hood story, this is, to me, the jolliest version. It must be the writing that was used for the Errol Flynn movie, Robin and Marion, and many others since. However, this reading is the best so far. Fun adventures, well told, and well read.
Listener Review - Audible.com

Our kids (ages 6 up to 14) enjoyed this, asking for it in the car, snagging the Garmin Nuvi to listen in the house. Clear and expressive diction, singing generally OK and sometimes terrific.
Listener Review - Audible.com

Great presentation of a classic story
The reader, David Thorn, takes his time to evoke moods, gives each character a distinctive voice, and speaks with a classic English accent. I listened to the samples of other readers' versions. One didn't create distinctive character voices. Another's way of reading sounded almost like a sneer to me. A third, while avoiding both these problems, spoke at a pace that moved the story forward (resulting in a recording a full hour shorter than this one), but failed to linger long enough over descriptive passages to evoke the mood of each scene. Howard Pyle's book is a classic, the first modern (1883) attempt to bring the various Robin Hood ballads together in a single narrative, while preserving the feel of medieval prose--all the more remarkable because Pyle was American, not English. (Pyle is perhaps best-remembered for his painting and drawing. He taught and influenced several other classic illustrators in the ""Brandywine School,"" including N. C. Wyeth. For ""Robin Hood,"" he provided ""medieval"" pen-and-ink drawings and decorations, a perfect marriage of image and text.) This is a book I've loved since childhood, and I'm happy to find a reading that does justice to it.
Listener Review - Audible.com
"