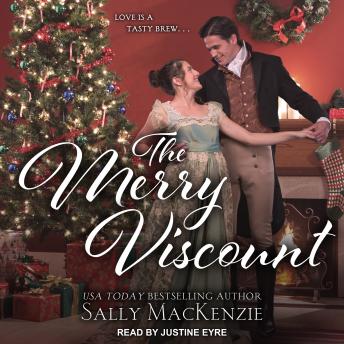 The 'fallen' ladies of Puddledon Manor's Benevolent Home are determined to rise above scandal-and forge a sparkling new future operating their own brewery and alehouse . . .

With Christmas around the corner, Miss Caroline Anderson hoped to persuade a London tavern owner to carry the Home's Widow's Brew-only to discover the dastard was more interested in her ankles than her ale! To her further annoyance, her stagecoach back to Little Puddledon is waylaid by louts and a snow-covered ditch. Amid a nasty storm, Caro seeks shelter at a nearby estate-only to be greeted by Viscount Oakland, a.k.a. Nick, her brother's childhood friend-and her schoolgirl crush. Now he's the half-dressed host of what is clearly a holiday bacchanal. Still, his house is irresistibly warm . . .

Ever the free spirit, Nick has invited the wilder gentleman of the ton, and an assortment of London's lightskirts, to celebrate Christmas in a more traditional, pagan fashion. So, he's surprised to find Caro at his door. Now, with a blizzard raging, he must take her in-despite his fear she won't take to his guests, and worse, upend his party. But she may surprise him-and upend his life . . .