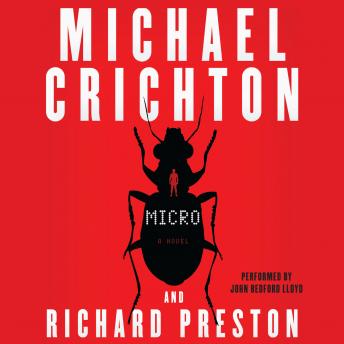 In the vein of JURASSIC PARK, this high concept thriller follows a group of graduate students lured to Hawaii to work for a mysterious biotech company--only to find themselves physically transformed and cast out into the rainforest, with nothing but their scientific expertise and wits to protect them.
IN JURASSIC PARK, HE CREAtED A tERRIFYING NEW WORLD.NOW, IN MICRO, MICHAEL CRICHtON REVEALS A UNIVERSE tOO SMALL tO SEE AND tOO DANGEROUS tO IGNORE.IN A LOCKED HONOLULU OFFICE BUILDING, three men are found dead with no sign of struggle except for the ultrafine, razor-sharp cuts covering their bodies. the only clue left behind is a tiny bladed robot, nearly invisible to the human eye.IN tHE LUSH FOREStS OF OAHU, groundbreaking technology has ushered in a revolutionary era of biological prospecting. trillions of microorganisms, tens of thousands of bacteria species, are being discovered; they are feeding a search for priceless drugs and applications on a scale beyond anything previously imagined.IN CAMBRIDGE, MASSACHUSEttS, seven graduate students at the forefront of their fields are recruited by a pioneering microbiology start-up. Nanigen Microtechnologies dispatches the group to a mysterious lab in Hawaii, where they are promised access to tools that will open a whole new scientific frontier.BUt ONCE IN tHE OAHU RAIN FORESt, the scientists are thrust into a hostile wilderness that reveals profound and surprising dangers at every turn. Armed only with their knowledge of the natural world, they find themselves prey to a technology of radical and unbridled power. to survive, they must harness the inherent forces of nature itself.AN INStANt CLASSIC, MICRO pits nature against technology in vintage Crichton fashion. Completed by visionary science writer Richard Preston, this boundary-pushing thriller melds scientific fact with pulse-pounding fiction to create yet another masterpiece of sophisticated, cutting-edge entertainment.