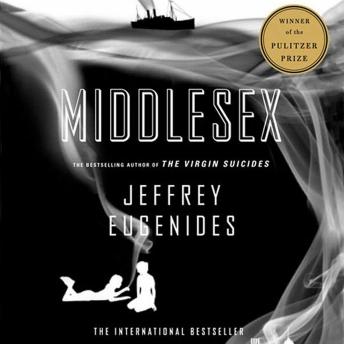 Winner of the 2003 Pulitzer Prize for Fiction and the Audie Award for best unabridged fiction, Middlesex marks the fulfillment of a huge talent, named one of America's best young novelists by both Granta and The New Yorker.

In the spring of 1974, Calliope Stephanides, a student at a girls' school, Grosse Pointe, MI, finds herself drawn to a chain-smoking, strawberry-blonde classmate with a gift for acting. The passion that furtively develops between them - along with Callie's failure to develop - leads Callie to suspect that she is not like other girls. The explanation for this shocking state of affairs takes us out of suburbia - back before the Detroit race riots of 1967, before the rise of the Motor City, to 1922, when the Turks sacked Smyrna and Callie's grandparents fled for their lives, back to a tiny village in Asia Minor where two lovers, and one rare genetic mutation, set in motion the metamorphosis that will turn Callie into a being both mythical and perfectly real: a hermaphrodite.

Sprawling across eight decades - and one unusually awkward adolescence - Jeffrey Eugenide's long-awaited second novel is a grand, utterly original fable of crossed bloodlines, the intricacies of gender, and the deep, untidy promptings of desire.

The narration almost ruined this book for me. I had to keep distancing myself from it to appreciate the writing. The voice is terribly affected, sometimes it feels like he’s mocking the characters making them sound cartoonish. It's too old to be the voice of the character narrating. Then there’s the weird music suffocating key moments of the story. Wish I had read this book...

I LOVED the narration! I thought the narrator did an incredible job of enveloping you into the story. The book was absolutely incredible - I'm so sad it's over!

Captivating, amazing story of several generations of greek immigrants. It's astonishing how Eugenides told the story from a young girl's point of view with such real emotions. The research into this subject was vast; the topic was unusual and I learned quite a bit about the medical aspects of intersex individuals. 4 star to narrator. In the beginning the narration was ok, then narration impeoved significantly but at the end of the book there were some sound issues.

I absolutely loved this book. I had to read it for my literature class and honestly didn't have high hopes for it, but wow! It's one of my faves now. Love the style of writing and how detailed the author is. Now I want to read more by Eugenides. Highly recommend!!! The narrator is great. Did different voices for all the characters, and was super easy to understand. No complaints.

The Greeks sound as Russians and all the rest as members of the mafia, what a pity .

Masterful- one of those rare books which is both thoughtful and entertaining. Eugenides tackles a towering subject- and he does so well.

What a wonderful journey through a roller coaster of a life and the lives of those before. The narrator did a fantastic job of making me feel submerged in the characters culture.

Excellent story, superbly written language, magnificent narrator with various accents which highlighted the variations of voices. Enjoyed the book, the story and audio.

Loved this story teller! He did a great job. Both the author and reader. :)

Book was very slow and not what I expected from the preview I read . Good overall though