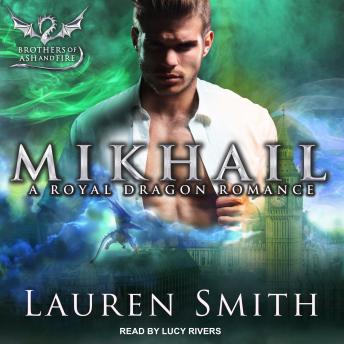 The second eldest in an ancient line of Russian dragon shifters, Mikhail Barinov had one job: protect one of the family hoard of jewels. Distracted by the English virgin queen Elizabeth, who was as dazzling as she was devious, he lost everything. Five centuries of exile later, news that a construction crew has unearthed a massive trove of gold and jewels sends him racing to London, determined to steal back his family's treasure . . . and his honor.

Professional gemologist Piper Linwood can't wait to bury herself in her newest project, evaluating a hoard of Elizabethan-era treasure. But both her life and career are threatened when a mysterious, brooding man with a dangerous smile-and an even more dangerous kiss-snatches the lot.

Unwillingly swept along for the ride, Piper discovers Mikhail is no mere thief. And the dragon on his back is more than a tattoo. It's a living, breathing extension of a bad boy she's finding harder and harder to resist. But his heart is a treasure she can never own . . . because to save her career, she'll have to betray his trust.