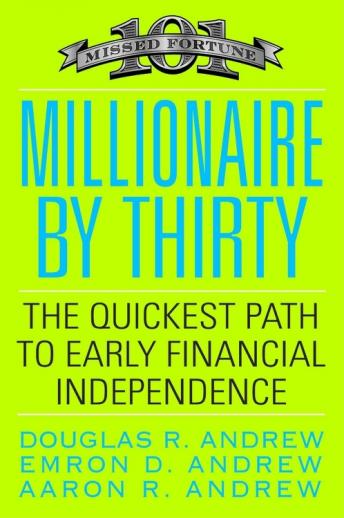 Millionaire by Thirty: The Quickest Path to Early Financial Independence

Most people know that there are 70 million Baby Boomers in America today....but what is less known is that there are approximately 100 million people in America between the ages of 16 and 30. This generation has just entered, or will soon be entering the work force. And they have no idea how to invest, save, or handle their money.

Young people today come out of school having had little or no formal education on the basics of money management. Many have large debts from student loans looming over their heads. And many feel confused and powerless when their pricey educations don't translate into high paying jobs. They feel that their $30,000-$40,000 salary is too meager to bother with investing, and they constantly fear that there will be 'too much month left at the end of their money.'

Douglas R. Andrew has shown the parents of this generation a different pathway to financial freedom. Now, he passes those vital lessons to his sons, Emron and Aaron, both of whom are in their mid-20s. Together, Doug, Aaron, and Emron show the under-30 crowd how they can break from traditional 401k investment plans and instead can find a better way by investing in real estate, budgeting effectively, avoiding unnecessary taxes and using life insurance to create tax-free income.

Millionaire by Thirty: The Quickest Path to Early Financial Independence

This title is due for release on April 30, 2008
We'll send you an email as soon as it is available!