The Millionaire Messenger: Make a Difference and a Fortune Sharing Your Advice 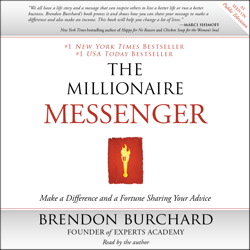 The #1 New York Times bestseller from world-renowned advice expert teaches everyday people how to share their story and wisdom with the world and build a lucrative business doing so.

In this game-changing book by Brendon Burchard, founder of Experts Academy, you’ll discover: Your life story and experience have greater importance and market value than you probably ever dreamed.

You are here to make a difference in this world. The best way to do that is to package your knowledge and advice (on any topic, in any industry) to help others succeed.

You can get paid for sharing your advice and how-to information, and in the process you can build a lucrative business and a profoundly meaningful life.

In The Millionaire Messenger, legendary expert trainer Brendon Burchard pulls back the curtains on the advice industry and shows you a simple ten-step plan for making an impact and an income with what you know. The lessons you’ve learned in life and business are about to become your greatest asset—and your greatest legacy.

Millionaire Messenger: Make a Difference and a Fortune Sharing Your Advice