The Millionaires' Unit: The Aristocratic Flyboys Who Fought the Great War and Invented American Air Power 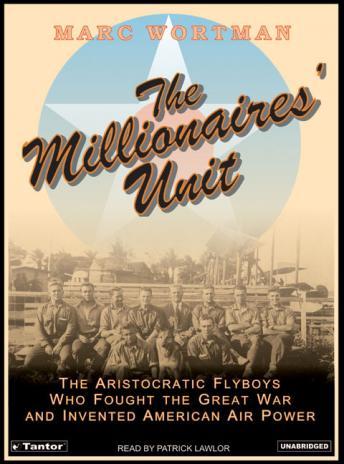 The Millionaires' Unit is the story of a gilded generation of young men from the zenith of privilege: a Rockerfeller, the son of the head of the Union Pacific Railroad, several who counted friends and relatives among presidents and statesmen of the day. They had it all and, remarkably by modern standards, they were prepared to risk it all to fight a distant war in France. Driven by the belief that their membership in the American elite required certain sacrifice, schooled in heroism and the nature of leadership, they determined to be first into the conflict, leading the way ahead of America's declaration that it would join the war. At the heart of the group was the Yale flying club, six of whom are the heroes of this book. They would share rivalries over girlfriends, jealousies over membership in Skull and Bones, and fierce ambition to be the most daring young man over the battlefields of France, where the casualties among flyers were chillingly high.

One of the six would go on to become the principal architect of the American Air Force's first strategic bomber force. Others would bring home decorations and tales of high life experiences in Paris. Some would not return, having made the greatest sacrifice of all in perhaps the last noble war. For readers of Flyboys, The Greatest Generation, or Flags of Our Fathers, this patriotic, romantic, absorbing book is narrative military history of the best kind.

This title is due for release on June 19, 2006
We'll send you an email as soon as it is available!