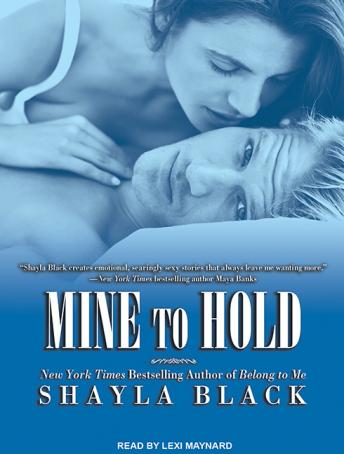 Tyler Murphy was an LAPD detective, single and happy-until a near-fatal tragedy crippled his friend, fellow detective Eric Catalano. While Tyler supported Eric, he also became a shoulder for Eric's wife, Delaney, to lean on. But with one naughty suggestion from Eric, a drunken night with Delaney spilled into erotic abandon. Before it was over, Tyler saw his best friend's wife as a woman and yearned for more. When Eric struggled to deal with the aftermath, Delaney begged Tyler to leave. Crushed, he fled to Louisiana, hoping to escape his longing for the one woman he could never have again...and unaware of what he'd left behind.

After two years of living with regret, Tyler finds Delaney on his doorstep, her husband having abandoned her long ago. She's protecting a shocking secret and desperately needs refuge from a stalker determined to see her dead. As they fight to stay alive and catch the killer, they struggle to resolve the guilt of their past pleasures. But they can't deny that what was once a spark is now a flame burning out of control. To possess Delaney-body and soul-Tyler must heal her pain and thwart the evil that's a mere breath behind her.