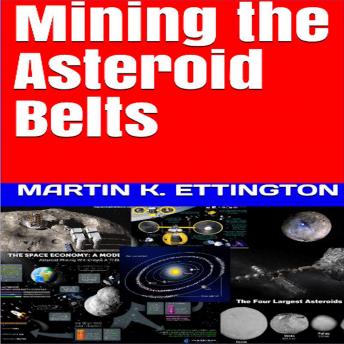 First of all, why is the title of this book about mining Asteroid Belts? When we learned about the Asteroid Belt when studying the Solar System in school there was only one Asteroid Belt. The one in orbit between Mars and Jupiter.
With the discovery of the Trojan Asteroids in Jovian orbit and in orbit ahead and behind of the planet Jupiter, we now have more than one belt of asteroids around the Sun. If we include the Kuiper Belt out beyond Pluto, there are many additional thousands of asteroids to consider. There are also near Earth Asteroids which orbit close to and sometimes hit our planet.
So there are many thousands of Asteroids in the Solar System and this book is focused on how do we get to them, live on them, and mine them.
There are several known types of Asteroids, and the metal ones have the most promise to provide rare materials to fuel Earth’s industries. Also, how would these metals be processed and sent back to Earth?
What would traveling to and living on Asteroids be like? And what life support systems would be needed?