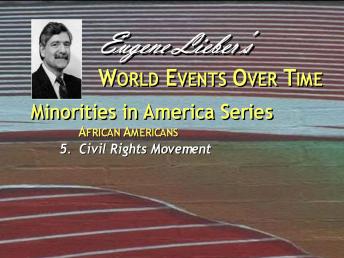 Birth of Modern Civil Rights Movement. NAACP changes society through law, but is not relevant to everyday black people's needs. Decade of the 50s: 1954 Supreme Court ruling overturns “separate but equal” education law of Brown versus Topeka Board of Education. This is fiercely resisted by the South. Issue of law versus law enforcement. President Eisenhower reluctantly enforces school integration. Rosa Parks, bus integration hero. Emmitt Till's murder shocks the nation, gives impetus to civil rights movement. The role of the churches. The risk of everyday people encountering and resisting discrimination. (7.35.00) = Martin Luther King, Jr. A Baptist minister. Advocates passive resistance to unjust laws. Experiences jail terms, threats. Robert Kennedy, U.S. Attorney General, is sympathetic to King, but J.Edgar Hoover regards King as public enemy # 1 (5.58.00) = Freedom Summer, 1964. Black and white civil rights workers go south and register blacks to vote. Two whites, Goodman & Schwerner, and one black, Chaney, are found tortured and murdered, arousing the nation's conscience. The Civil Rights Act and the Voting Rights Act are enacted in 1960s by Lyndon Johnson, a Southerner. Failure is due to the Vietnam War which diverts social funding. Riots in cities, seen as caused by thwarting of rising expectations. (15.25.00) = Resistance to Segregation. March on Washington led by Martin Luther King, with JFK not in favor but he welcomes it when it seems inevitable. Lyndon Johnson's legislation. Black Panther Party's message is opposite of King's: return violence with violence. State violence always greater than any from organizations. Some blacks turn to Islam. Nation of Islam. believes all whites are evil, attracts members. Promotes purity of body, aids abstention from alcohol and drugs. Malcolm X. His early life as a petty gangster, converts to Islam while in prison, becomes member of Nation of Islam. Advocates violence for violence. Toward the end of his life he modifies his racial views, addresses social and economic issues. He is assassinated. (29.39.00) = Backlash. The gap between rich and poor widens. Sentencing procedures with mandatory long prison terms for small time drug offenses penalize black disproportionately. College involvement lessens. The present lacks the optimism seen in the 1960s. Apathy, fatalism often exists. Yet some gains remain. De facto segregation skirts desegregation law, increasing segregated society. Yet the absolute Jim Crow laws lessened. Gains are not permanent; there can be reversions. A way to keep people down is to deny them their history. Rediscovering the past is a strengthening, helps to understand the present, and reflects future possibilities.