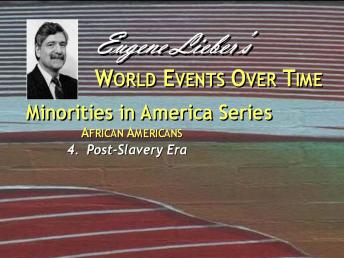 Post-Civil War Era. Reconstruction. What to do with freed slaves who are 97% illiterate? Mixture of Northern motives: revenge, political, economic, and moral. Alliance between ex-slaves and poor whites after given land. Compromise of 1877 ends Reconstruction and Union troops withdraw, coloring South's history since. (14.56.00) = Re-emergence of the Master Class. The rise of sharecropping, in some ways is worse than slavery. The myth of the South's "Gone With The Wind" perception of itself as victim. (20.26.00) = The One Party South. In the 1896 election the Populist Party decides to support the losing candidate. This leads to the Populist Party collapse and ultimate demise. Now the upper class whites are in control of the Democratic Party and no longer need to curry favor with the blacks (29.34.00) = Jim Crow Era. Racial segregation takes hold. Plessy versus Topeka Board of Education Supreme Court decision allows education to be separate but equal. Every conceivable institution is sharply segregated. Lynching is wide spread. State and local governments are compliant. The federal government does nothing. (35.43.00) = Early 20th Century. The Progressive Era. reforms totally neglected race. The racism of Teddy
Roosevelt. President Wilson segregates D.C. civil service. Racial stereotypes in Hollywood films such as "Birth of a Nation" (3813.00) = Black CommunityDebates Over Role of Blacks. Booker T. Washington, an ex-slave, advocates blacks to learn a trade to make a living. W.E.B. DuBois, a Nornerner and academic scholar, a founder of NAACP, advocates blacks to strive for equally through education and political action. (41.37.00) = Jack Johnson. A flamboyant black who dates white women is outrageous to whites, is a hero to blacks. (46.43.00) = WWI. Blacks in the army are segregated, but experience non-racist treatment by the French, which is resented by white soldiers. After the war, black veterans seek greater equality, are disappointed. (47.57.00) = 1920s. Harlem Renaissance. Black Nationalism. KKK revival. (52.28.00) = 1930s. The Great Depression. Blacks in the army are segregated, but experience non-racist treatment by the French, which is resented by white soldiers. After the war, black veterans seek greater equality, are disappointed. Eleanor Roosevelt. Marian Anderson is blocked by Daughters of the Revolution from singing in D.C. Eleanor Roosevelt sponsors and attends her concert at the Washington Monument. She supports the skills of Tuskegee black pilots during WWII by insisting they pilot her. (1.05.46.00) = WWII ends the Great Depression. Great need for labor for war production becomes golden opportunity for blacks (and women). Blacks meet the challenge of equal opportunity. They resist giving up jobs to returning white veterans. This is birth of modern civil rights movement. (109.29.000) = Sports. Joe Louis. Boxer knocked out by German Max Schmeling, hero to Nazis. On rematch, he KOs Schmeling in 1st round, is hero to blacks and whites in America. Jackie Robinson. Sports are segregated. Robinson in separate Negro baseball league. Brooklyn Dodger owner, Branch Rickey, chooses Robinson as first black in white major league. (1.17.16.19) = Cold War Era. Paul Robeson. Earns law degree, does acting. His singing voice is unforgettable and brings great fame to him from around the world. He is associated with Communist Party, and is a supporter of Russia. Very outspoken, he is ostracized by the U.S. as a subversive.