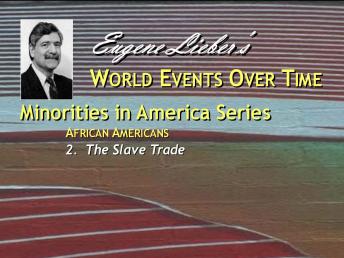 Ancient West Africa. Powerful ancient civilizations. Some are Muslim. Timbuktu is the university city. Expertise in metallurgy. European need for labor. American Indians resist slavery in colonial times. Slavery already exists in Africa but in less harsh forms. (6.04.00) = West African slave trade. Why the slave trade? Why West Africa? Europe slave trade dominated by England, starting in early 1500s. English agents make deals with West African tribal chieftains to trade goods, sometimes guns, for slaves. The chiefs accepted, partly out of greed, but mostly to secure guns so as not to be at a serious disadvantage with rival tribes who obtain English guns. (10.28.00) = Impact . Devastating long-term impact on West Africa. Transporting the slaves. The impact on the slaves and on the sailors. Previously stable tribal society becomes unstable, chaotic. Over the 300 year period, the search for slaves extends deeper inland. Slaves are transported on English ships whose owners reap great profits (13.33.00) = The Middle Passage. The journey across the Atlantic Ocean is a horror story. "Loose padding" and "tight padding" refers to the packing of slaves on the ships. Greatly distressing daily routine for the slaves during the voyage. Severe impact on slaves and crew. Extreme confinement and lack of ventilation. Voyages range from 3 weeks to 3 months. (20.20.00) = Armistead Mutiny. The slaves seize the ship which lands on Long Island, is eventually returned to its Spanish owner, but slaves are freed. Mutinies are rare, little opportunity. Role of disease. (23.16.00) = Impact on crews. Sailors are often impressed against their will. They are harshly treated, including poor food, during the voyage, experience higher death rate than slave. (25.02.00) = Completed voyage. Slaves are auctioned in West Indies, then onto plantations in the American South, and put to work. The ship's crew may be partially ditched, without pay, for return voyage because less crew is needed for cargo of consumer materials. Sailors are treated abominabl (27.39.00) = End of the SlaveTrade; Continuation of Slavery. England and America abolish the slave trade in early 1800s. Reason is only partially because of its immorality, but mainly economic. It is the beginning of the industrial revolution. Industrial wealth is greater than agricultural wealth. It is more lucrative to invest in factories. The slave trade continues illegally, where conditions worsen. Limited enforcement of ban. Slave trade ends only when the American South loses the Civil War in 1865. (35.09.00) = Impact on West Africa. . The 300 year slave trade wreaks chaos and enormous deaths, estimated at 50 million, with devastating impact on reproduction. West Africa never recovers. In 1870 modern European imperialism begins, taking over various parts of Africa as colonies, with great destruction of land and its people.