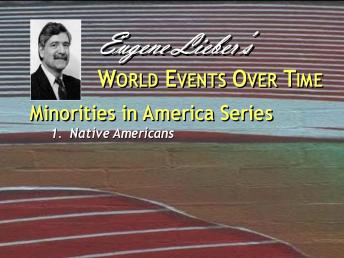 Origins in North America. First Indians believed to cross over the Bering Strait land mass from Siberia about 12 million years ago. Some adapt to climate and terrain all the way to the tip of South America. (6.02.00) = The Incan Empire. No written language. No use of metal tools. 14,000 miles of roads built. How and why they are destroyed by Pissaro (13.46.00) = The Mayan Empire. It thrives, declines before the Spaniards come. Written language. Urban civilization. Why Mayan pyramids are independent from Egyptian pyramids. Why the Mayans decline. (19.46.00) = Patterns of Indentations. The genius of a people who can use ground perspective to imagine how something should appear from the sky. (22.37.00) = Indian Architecture. In Colorado, southwest U.S. cliff dwellers carve multi-story dwellings, protected by cliff overhangs. (26.09.00) = Impact of the English. Before the English Come women have high status. Religion of animism. Oral tradition. Hollywood myths. . (32.37.00 = After the English. The English exploit generous Indian nature to seize land. The English view Indians as inferior. Why killing or converting Indians to Christianity are equal choices for the English. Resistance of Indians. Quakers make a difference but the story ends badly for the Indians anyway. (44.53.00) = Decline of Indians. Destruction of Indians by disease is especially cruel when it is intentional. Why the Supreme Court decision in favor of Cherokees ends in the “Trail of Tears (1.01.30.00 = IndianResponses & Myths. The varying approaches by tribes to the English push west. The myths of scalping, captive white women, and Custer's Last Stand. (1.08.25.00) = Native Americans' Fate. Choices are isolation on their reservation or assimilation. Abysmal life on the reservation but they can preserve their culture. Difficulties assimilating in the general society (1.13.43.00) = Resurgence of Ethnic Pride.in the 1960s and revival of traditions and values, paralleling civil rights movements by African-Americans and women. Recent efforts to enforce treaties will take many years to resolve