Minorities in America Series: Women in America: Colonial Period Through the Civl War 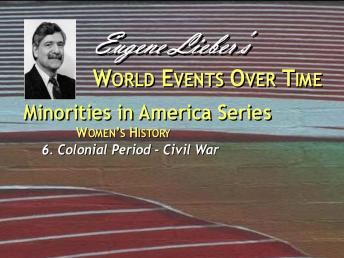 Women Before Europeans Arrived. Women have high status in matriarchal native American society. From gathering they invent agriculture, dominate farming while men hunt. Religion is animism, worship of nature, adding to women's stature as bearer of children. (5.52.00) = Native American Women. The introduction of the horse by Europeans reverses by resulting in more sophisticated hunting. Women's status deteriorates. European men see women as second class citizens. Enormous loss of Native American life from disease from Europeans, sometimes deliberate. (1036.00) = English Women Here Die Early here die early from multiple pregnancies. Farm women have endless chores. Rights of women: women can inherit but husbands own everything. Unmarried women are seen as whores. The frontier is more liberal for women. Politically, women have no rights. Most occupations closed to them. Women are subordinate to men. They are labeled as unclean during their menstrual cycle, in contrast to tribal society. Women are either placed on a pedestal or seen as a whore, unrealistic extremes. Unequal penalties for extra-marital affairs. There are classes for white women in rural South. Lower class women must wear heavy garments from head to toe, adding to distress of heavy labor on the farm. Mid-upper class women wear clothers to create men's ideal of the hour-glass figure, creating disfigurement. (22.15.00) = Women in the Revolutionary War Period. Women have important and dynamic roles. The Stamp Act boycott. War roles include logistic support, spying, smuggling under clothes. Still there is the full farm burden. Women adequately manage the farm labor as well as the business side. Abigail Adams is an icon of frustration of able women thwarted. (33.40.00) = After the Revolutionary War. Late 1700s into 1800 family and economic changes. Decline in women's status. Women remain on the farm unpaid, while men earn in towns, cities. Incentive for women's literacy is increased so they can nurture children in values of the republic. In the 1800's teaching and secretary work open to women. (37.15.00) = Women and the role of religion. The Great Awakenikng. Religious revivals in the 17 & 1800s to get back to the core of religion in individual lives. Has evangelical quality, greater emotional content. Leadership by some women, giving them access to power. Generally allowed by men who lead traditional religious forms because they see women as inferior, emotional and irrational compared to the rational natures of men. (40.32.00) = Slavery and Plantation Life. Experiences of slave women. Slave marriages formed by stepping over a broom, ended by stepping back. Family life exists in this form, with the benefits of the extended family. The surprising role of the Mammy on the plantation. The constant tension and terror from plantation masters. Dangers and tension continue. (49.02.00) = 19th Century: Some occupations open to women including elementary school teaching, later secondary school. Status of education declines when women dominate. Clerical and secretary work also decline in status as they become more open to women. The Lowell Mills, a strange phenomenon in early industrial America. Single women start at the mills at age 15 until the age 30, work long hours with low pay, living in sheltered conditions. (54.04.00) = The Start of the Women's Movement in Seneca Falls, NY, in 1848. Susan B. Anthony gives up marriage and children to devote herself to this cause. Elizabeth Cady Stanton is the thinker, the philosopher of the movement (1.05.29.00) = Notable Women In ColonialTimes. Ann Hutchinson promoted the Protestant ideal of 1-on-1 relationship with God, was expelled from community partly because being a woman is a negative factor. Anne Bradstreet writes poetry, offsets stereotype of dry, rigid women. Abigail Adams expresses frustration with lack of opportunity for outlet of abilities. In the mid-19th century: The stock figure of the invalid wife in literature. This is a way of avoiding unwanted sex with her husband when expected to always submit. There are also strong women portrayed in literature. There are the breakthrough women. End of the Civil War: Ex-slave women now are free to seek lost family member across the South, make a life for themselves, managing work and family care. The image of the Southern belle is fading as industrialization emerges with its effect on women. (1.08.28.00) = Abolitionist Movement. The negative view of upper class women involved sees them as dilettantes, causing more harm than good, actually prolonging slavery. The positive view is that they keep the issue alive. The Grimsby sisters associate the end of slavery with women's rights. Harriet Tubman and the underground railroad assisting escaped slaves. Sojourner Truth believes that the slave cause and women's rights are embedded in the same values.

Minorities in America Series: Women in America: Colonial Period Through the Civl War