Minorities in America Series: Women in America: Women's Rights in the Modern Era 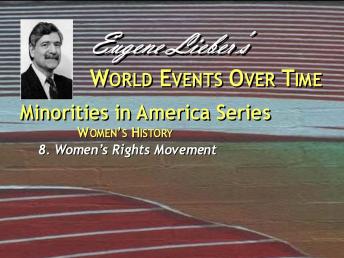 The early 20th century. The Flapper originated before the 1920s. She is a working girl who wants to have fun at night after work. Gibson Girl is a tall, educated professional, personified by Katherine Hepburn. Women in Mexican families who have immigrated to the southwest U.S., and traditionally under control of their husbands, now become more independent, gain more control over their own lives. (4.07.00) = The Great Depression. Prior to the Stock Market crash of 1929, 2/3 of Americans live in poverty. There is a great deal of suffering. Rise of shanty towns. Women are somewhat more able to find employment, a source of great humiliation for their men. (9.46.00) = Eleanor Roosevelt. is role model for women, pushes for reforms, especially for the poor and against racial discrimination. The Daughters of the Revolution, which owned Constitution Hall in D.C. refused to allow Marian Anderson, a black singer, to perform there. Mrs. Roosevelt countered by organizing her concert at the open air mall, which was a rousing success. She also brushed aside air force discrimination against black aviators, the Tuskegee Airmen and had them pilot her. There was much social gain for women during this period (13.45.00) = Origin of Modern Women's Movement. World War II is significant turning point. Need for logistical support for military. Labor shortage and booming factory jobs. Women resist returning to old ways when war is over. (23.47.00) = Conformity of the 1950's and the Cold War. Women as passive helpmates, supported by media images. Men lead the 1960s civil rights movement, but women like Rosa Parks have crucial roles. The youth and black power movements often continue to denigrate women. (39.42.00) = 1960s-1970s Women's Rights Movement. Impact of the book, "Feminine Mystique," by Betty Freidan. Consciousness-raising is empowering. The role of one book, "Our Bodies, Ourselves." Awareness of women attracted to other women. Reasons for Increased divorce. Increased political activism. Opportunity for equality in occupations. (51.31.00) = Backlash. Movement resisted by trivializing and ridiculing it. Women who want the status quo oppose Equal Rights Amendment. Roe versus Wade: Women's control over their own bodies. .Impact on men who can show more feelings and become more whole persons. U.S. gains are favorable compared to other countries, but the need for ongoing change.

Minorities in America Series: Women in America: Women's Rights in the Modern Era