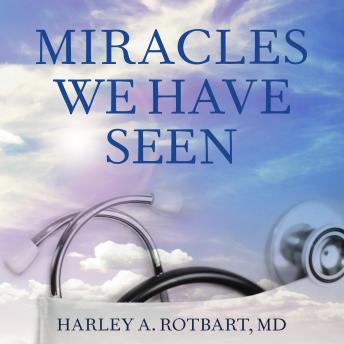 Written By: Harley A. Rotbart Md

This is a book of miracles-medical events witnessed by leading physicians for which there is no reasonable medical explanation, or, if there is, the explanation itself is extraordinary. These dramatic first-person essays detail spectacular serendipities, impossible cures, breathtaking resuscitations, extraordinary awakenings, and recovery from unimaginable disasters.

Among the extraordinary cases poignantly recounted by the physicians witnessing them:

A priest visiting a hospitalized patient went into cardiac arrest on the elevator, which opened up on the cardiac floor, right at the foot of the cardiac specialist, at just the right moment.
A tiny premature baby dying from irreversible lung disease who recovered almost immediately after being taken from his hospital bed and placed on his mother's chest.
President John F. Kennedy's son Patrick, who died shortly after birth, and whose disease eventually led to research that saved generations of babies.

Miracles We Have Seen is a book of inspiration and optimism, and a compelling glimpse into the lives of physicians.

by Harley A. Rotbart Md