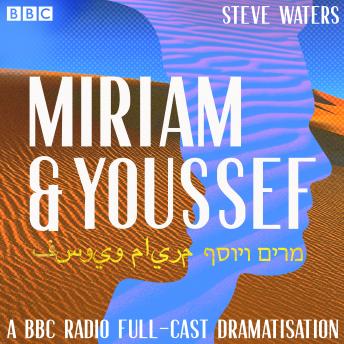 A compelling 10-part drama about the founding of Israel, told through the parallel voices of a Jewish immigrant and an exiled Palestinian

1917. As the British enter Palestine with the aim of facilitating a Jewish homeland, young Arab Youssef Bannourah befriends Harry Lister, an English civil servant who has come to live in his village of Deir Yassin. Impressed by Youssef's intelligence, Harry finds him a job working for the British administration. Meanwhile, fleeing Jewish persecution in Russia, Miriam Cohen and her mother Sara set sail for the promised land. On arrival, they move to a newly constructed kibbutz near Jerusalem, where - divided by faith and a fence - Miriam meets Youssef for the first time.

Both dream of a nation where Jews and Arabs can live together in harmony. But their youthful idealism soon turns to disillusionment, and as tensions rise and violence erupts in the holy city, they become embroiled in political upheaval and terrorism. And for naive, well-meaning Harry Lister, Britain's inability to keep the peace - and her promises - will have fateful consequences...

Spanning 31 years from the closing days of the First World War to 1948, this epic, multi-perspectival drama is narrated by an older Miriam and Youssef, who recount the story to their children. Moving seamlessly between past and present, it takes in key figures and pivotal moments in Israel's history, including the Balfour Declaration, the 1930s Arab Revolt, the bombing of the King David Hotel and the UN vote to partition Palestine.

Written by acclaimed playwright Steve Waters, Miriam and Youssef takes a nuanced look at the turbulent chain of events that led to the birth of the State of Israel, shedding fascinating light on the ongoing Israeli/Palestinian conflict. Among the diverse cast are a host of top Middle Eastern and British actors, including native Israeli Shani Erez as Miriam, Egyptian-born Amir El-Masry as Youssef and Londoner Blake Ritson as Harry Lister.