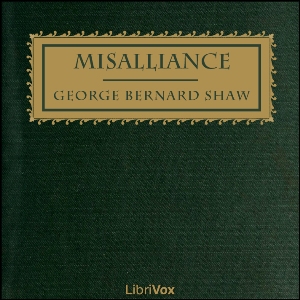 Misalliance, a 1910 play by George Bernard Shaw, is an ironic examination of the romantic entanglements of a varied group of people gathered at a wealthy man's country home on a summer weekend. Most of the romantic interest centers on the host's daughter, Hypatia Tarleton, a typical Shaw heroine who exemplifies his lifelong theory that in courtship, women are the relentless pursuers and men the apprehensively pursued. Hypatia is the daughter of newly-wealthy John Tarleton who made his fortune in the unglamorous but lucrative underwear business. She is fed up with the stuffy conventions that surround her and with the hyperactive talk of the men in her life. Hypatia is engaged to Bentley Summerhays, an intellectually bright but emotionally underdeveloped aristocrat. Hypatia is restless with her engagement as the play starts, even as it is revealed she has also had a proposal of engagement from her betrothed's father, Lord Summerhays. She longs for some adventure to drop out of the sky, and it does: an aircraft crashes through the roof of the conservatory. The plane's passengers, a handsome young pilot and a Polish acrobat, shake up the house party considerably. (Summary by Wikipedia and Elizabeth Klett)