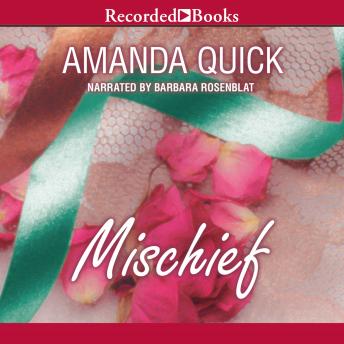 As soon they are released, Amanda Quick's romances shoot to the top of best seller lists. With over 22 million copies of her books in print, she is one of today's hottest authors. Set in Regency-era England, Mischief offers a sparkling mixture of wit and intrigue that has become Quick's trademark. Beautiful, headstrong Imogen Waterstone has recruited the darkly infamous Earl of Colchester to help her seek revenge for the murder of her best friend. As they set a trap for the villain, Imogen and Colchester fearlessly encounter the threats and dangers that come their way. But they are both unprepared for the dizzying passion sparked by their partnership. Amanda Quick's light, breezy style captures the sophisticated nuances of the 19th century British social world that surrounds these two unconventional allies. Filled with spirited dialogue delivered by the incomparable talent of narrator Barbara Rosenblat, Mischief is a thoroughly delightful adventure.