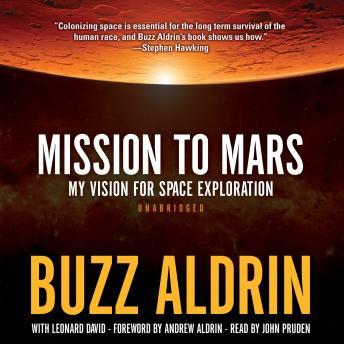 Mission to Mars: My Vision for Space Exploration

Legendary "space statesman" Buzz Aldrin speaks out as a vitaladvocate for the continuing quest to push the boundaries of the universe as weknow it. As a pioneering astronaut who set foot on the moon duringmankind's first landing with Apollo 11-and an aerospace engineer who designedan orbital rendezvous technique critical to future planetary landings-Aldrinhas a vision, and in Mission to Marshe plots out the path he proposes, one that will take humans to Mars by 2035.
Sections include
Foreword by Andrew AldrinChapter 1: The View from Air Force OneChapter 2: Time for Decision-MakingChapter 3: Your Space: Building the Business CaseChapter 4: Dreams of My MoonChapter 5: Voyage to ArmageddonChapter 6: The March to MarsChapter 7: Homesteading the Red PlanetChapter 8: The Clarion Call

Mission to Mars: My Vision for Space Exploration