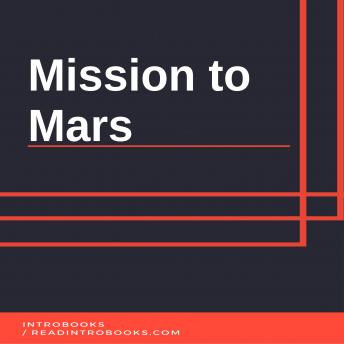 Mars has always signaled to the mankind when it would travel high in the night sky. The ancient people have assumed that this rust-red planet was the god of war and therefore, they christened it with the name "Mars".


The early explorers were armed with newly forms of invented telescopes discovered that Mars exhibited seasonal color changes and were subjected to dust storms that used to encircle the globe and might even have had several channels that could have crisscrossed the surface.
The recent explorers make use of the advanced technology and the robotic surrogates to extend their reach out to the planet Mars. With the use of the advanced technology, they have discovered that Mars is much more interesting and the complex planet in the Solar System. As per the claims of the present explorers that pieces of Mars have even arrived on the Earth as meteorites and these particles are pointing out to the possible existence of life on Mars. This has resulted in the growth of the active interests of the explorers to gain impetus about the living conditions on Mars.


In the past several years, several approaches have been adopted to explore Mars - the Earth's sister. Several theories have been deduced and with the study, we are enlightened about the goal of the sending human beings to the surface of the Earth in order to explore its mysteries. A key element of the future advancements in the Mission to Mars would involve the incorporation of the integrated robotic or human exploration strategy that is currently under the development process.


There have been developments made in the production of the alternative approaches, technologies, flight demonstrations and precursor missions that can collectively move the Mission to Mars in the forward direction. Inputs have always been provided and will be provided in the future times that will be encouraged from all possible sources like NASA, industry, research organizations, government agencies, entrepreneurs, international partners, and even the general public. These all will help in the proper understanding and the current planning of the Mission to Mars. The current experts and explorers aim to make use of the advanced technology for the assessment of the innovative and break-through approaches that are put forward to the most cost effective exploration of the Mars. These data will also help the humans in understanding the required infrastructure for the provision of vital insights into how the International Space Station can be used to validate the technologies and key assumptions.


For the proper achievement of the Mission Mars, the humans will have to change the way in a fundamental manner through which the exploration can be done with the help of the humans and the robots. The humans will have to search for effective alternatives for the substantial reduction of the cost of exploration while increasing the inherent value of the mankind. The Mission Mars could provide a starting point for the continuing efforts of the NASA for the development of the technologies and the overall systems along with the international partnerships that might be needed for the grand exploration and mission of sending humans to explore another planet - Mars in the Solar System. This increases the possibility that life might again thrive on the planet for all over again.