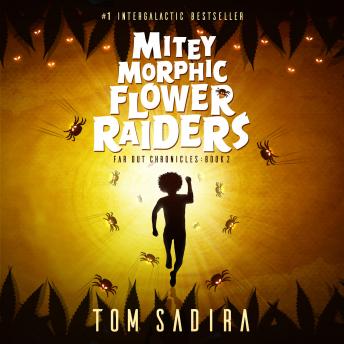 'Star Trek meets Cheech & Chong!' - #1 INTERGALACTIC BESTSELLING author Tom Sadira invites you on another trip to the farthest reaches of outer space in this hilarious sci-fi adventure saga.
In the past 24 hours, stoner Charlie Hong has been promoted from fugitive pot-grower to captain of the Starseed. Whether he likes it or not, the massive, living, interstellar spaceship-and its five hundred billion inhabitants-are now his responsibility.
As his suspicious crew gives him a tour of the ship, a quiet invasion unfolds. When the rest of his team is disabled by the buggy invaders, Charlie is left with a decision: to try to save the ship armed with only his stoned wit and a plump red hen, or to hightail it back to his old life on Earth.
INTERPLANETARY PRAISE FOR FAR OUT CHRONICLES:
"????? Tom Sadira's Far Out Chronicles has restored the galaxy's faith in Earth's ability to produce fresh and riveting science fiction. Without it, the Council would have demolished that dirty, backwater planet long ago." - Emperor Izzug Brutag of the 713th Galactic Council
"????? The fast-paced, imaginative storytelling really helps get things moving during the weeks-long excretion rituals of Alpha Orionis, if ya know what I mean." - Blek Ylp, custodial engineer in the Betelgeuse system
"????? The rip-roaring adventure series Far Out Chronicles kept the G'wark species distracted long enough for us to complete our weapon and wipe out their homeworld. Thanks Earthling!" - Commander Zrauvvurbu of the Essari Rebellion
"????? ...so witty and delightful it made me wish that my processor core was capable of laughter. I have scheduled it to be stored in my memory banks for more nanoseconds than is logical..." - Qu'tron Krix, Prime Instance of the Cyborg Continuum
"????? The hivemind of Pollux Major loved the Far Out Chronicles so much that we couldn't wait for more books in the series. We've used our forbidden time-jump technology to travel forward in time to get our hands on the complete works of Tom Sadira. All we can say is: it was totally worth the risk of temporal paradox!" - The Hivemind of Pollux Major
Readers have compared the The Far Out Chronicles series to Douglas Adams ' Hitchhiker's Guide to the Galaxy, Barry J. Hutchison's Space Team series, Robert Heinlein, Ernest Cline, John Scalzi, and James S.A.Corey.

This title is due for release on November 26, 2018
We'll send you an email as soon as it is available!