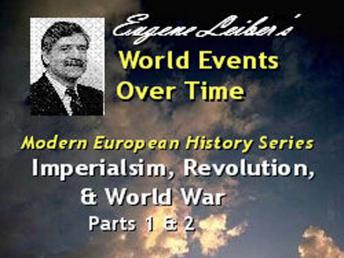 Impact of World War I. Impact of WWI. The World Will Never Be The Same. Outlook before is progress, onward and upward. After -- where are all the good leaders? --dead. Art and literature become abstract, music harsh. Freud's conceives the concept of the death wish. (2.44.00) = New U.S. World Role. U.S. enters the First World War partly for freedom of seas but also economic motives and Wilson's personality. U.S. emerges as the most powerful economy. (6.53.00) = The Treaty of Versailles and the League of Nations. Most of Wilson's 14 points are ignored. England and France want revenge. Although a strong supporter of the League of Nations, Wilson is mainly to blame for its rejection by the Senate. U.S. ambitions for world domination and the conflicting strategies by various American leaders. The Treaty of Versailles is both too lenient and too harsh on Germany and is a factor in the rise of Nazism. (23.54.00) = Russian Revolution's Profound Effect on the World. The Least Likely Revolution. Why conditions are the least favorable for revolution. Why the revolution of 1905 fails but the one in 1917 succeeds by a twist of fate by which a small minority gains power. How the Czar's image, Russia's participation in the first world war, the Czarina's role in the government, and the cult figure of Rasputin, all figure in this unlikely outcome. The contrasting views of the role of capitalism by Marx and by Lenin (39.14.00) = Two 1917 Revolutions.The Czar is forced to abdicate in early 1917. The bourgeois take power, led by Karensky who continues the disastrous war against Germany, leading to the second revolution in October 1917 by the Bolsheviks led by Lenin. (45.23.00) = The Threat to Capitalism. Russia fights a brutal civil war from 1918 to 1921 against 5 invading armies from all directions. How Trotsky, without military background, incredibly, defeats all of them one at a time. (48.18.00) = Bolsheviks rule over a wasteland. Buildings in ruin from war with Germany and civil war, millions of peasants killed, agriculture destroyed, and an influenza pandemic. Lenin had hoped that communism would spring up elsewhere in more advanced countries and then help out Russia. Revolutions did not occur successfully. In 1921 Lenin realizes he is alone in transforming Russia.

Russian Revolution's Profound Effect on the World (continued). Russia's economic directions. The New Economic Policy from 1921 until 1928 for gradual industrialization is part socialist, part capitalist. The drastic changes for rapid industrialization when Stalin takes power after Lenin's death in 1924. This effort, while brutal, is effective and helps Russia to survive the Nazi onslaught. (12.53.00) = A Beacon of Light. Stalin's crimes are overlooked as the Russian Revolution becomes a beacon of light to distressed people around the world. Yet it is the wrong role model to other countries with different conditions. (26.03.00) = Prelude to World War II. Rise of Fascism. In Italy and Germany, ultra-nationalism, extremism, supported by lower middle class which identifies own achievement with the nation's. Powerful racism based on pseudo-science. Concept of the all-powerful leader. Extreme and violent capitalism. (39.13.00) = Anti-Semitism. An ancient European phenomenon used by Hitler. The Jew as scapegoat. Holocaust requires great organization and support. Slave camps. Death camps. The "Banality of Evil," by Hannah Arendt. (57.28.00) = Spanish Civil War, 1936-1939. This is the moral opportunity to stop fascism. The world mindset remembering the horrors of World War I plus pro-fascist sentiments plus real politik leads to the start of World War.