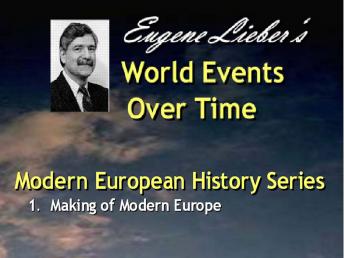 Transition Period. Rise of Capitalism. Population Changes. The role of the devastation of the bubonic plague in the movement from rural manors to towns and rise of guilds. After the stagnant medieval era, the beginnings of a new economic and social system as the pursuit of profit by business means (3.57.00) = The Renaissance. Marco Polo travels to China. Rebirth of past cultures. The Arab Empire. Scientific revolution. New view of the universe. Shift to secular humanism; non-religious, not anti-religious.
(9.47.00) = Age of Exploration. Reaping rewards from other countries, especially gold, and Christopher Columbus as a turning point in world history. Role of the printing press in the rapid growth of exploration. Ambivalent attitudes toward nature. Native populations devastated. (16.27.00) = Protestant Reformation. Christianity splits into Roman Catholicism and Protestantism in the early 500s. Luther. Calvin. The concept of religion and economic individualism as an extension of capitalism (21.33.00) = Rise of the Nation-State. In France, divine-right monarchy, Louis XIV, is the epitome in 18th century. (23.48,00) = The Enlightenment. People now seen as logical who can achieve happiness through science and education. Standards for ethical behavior. Influences later French Revolution. (28.09.00) = The Decline of the Monarchy. English Revolution of 1740s. Cromwell. Growing away from absolute monarchs. American Revolution of 1776. The shot heard around the world. It's possible to defeat a large power. French Revolution of 1789. Overthrow of monarchy. Napoleonic war brings modern age to others. (42.57.00) = The Industrial Revolution Modern Industrial Capitalism. . England begins the factory system, 1780-1830. The impact of the Closure Act forcing millions of peasants to seek work in the cities. The minimizing of costs results in enormous misery. The planned slums, child labor. The impact of the canal system and the railroads. England becomes the most powerful country in the world. Rise of the new force of nationalism, patriotism, and the self-image of superiority. (48.29.00) = Rise of the Nationalism. Early 1800s. Love of country, striving for indigenous unity, but also sense of superiority leading to extremism. (49.46.00) = The New Modern Age. In the 19th century. music, art, literature, and poetry show change from the set forms of the conservative period to romantic forms, expressing feelings. Labor saving inventions and advances in science and medicine advance the belief in intellectual and material progress. The division of social and economic thinkers who advocate no interference with trade, with others who press for a more egalitarian society with distribution based on need not profit.
Marx's view of capitalism. (53.03.06) = Industrial Capitalism. The division of social and economic thinkers who advocate no interference with trade, with others who press for a more egalitarian society with distribution based on need not profit (59.33.00) = Imperialism and Clash of Interests. Last ¼ of the 19th century. Need for control of foreign territory for raw materials and markets. England in India to milk resources as quickly as possible. Image of bringing modernity but actually creating backwardness. African countries are divided up. European countries establish spheres of influence in China. (1.06.10.00) = Seeds of Modern War. European countries, including Italy and Germany, undergo unification. The rise of German industrialization and competition for limited resources in the 19th century for industrial capitalism needs (1.09.54.00) = On a Collision Course. . Much progress in modernization in the 19th century but still mostly rural, but changing. On a collision course ending in the horror of WWI. Alliances are formed by England, France, and Russia, although a backward country, based on fears of Germany. Opposed by an alliance between Germany, Italy, Austria-Hungary. An arms buildup. Competition for colonies. On a collision course. (1.17.12.00) = WWI, 1914-1918. Germany plans to knock out France quickly and then take on Russia later. England declares war on Germany. Prolonged trench warfare. Pattern of attacking troops massacred by machine gun fire. Four years of slaughter until armistice in November, 1918.