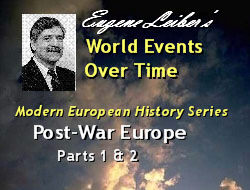 Switzerland: Controversial banking industry history about secret bank accounts and banking relations with the Nazis involving Jewish funds seized from Jews during the World War II Holocaust. (1.04.00) = Germany. After its defeat in 1945, Germany is divided into West Germany allied to the West, and East Germany allied to Russia. There are ways in which Germany comes to terms with its Nazi past, and the ways in which it does not. U.S. motivation for helping former Nazis escape punishment. The contrast between development in West Germany and East Germany. The Berlin Wall dividing the two Germanys comes down after the collapse of the Soviet Union in 1991, and Germany reunifies. Since then the German leadership variously veers right and left, assets its independence, leaving relations with the U.S. somewhat tenuous. Its opposition to the U.S. invasion of Iraq is an example. Germany will continue to be a central element in future world events. (13.48.00) = Russia. Victorious in World War II but is left in ruins. Expects friendly borders in East Europe. Makes accommodations with the West because of weakness and self-interest. After Stalin's death in 1953, Khrushchev emerges as his successor. In a stunning move he soon reveals publicly the full extent of Stalin's crimes, creating the sense of a "thaw," Encouraged, a Hungarian Revolution succeeds briefly but is brutally crushed by Russia. The episode of lost opportunity for further detente between U.S. and Russia when President Eisenhower's initiative is aborted by Russia's discovery of clandestine C.I.A. spy planes over their territory, which Ike is unaware of. The Cuban missile crisis is the closest the world comes to nuclear war, and ultimately leads to Khrushchev's downfall. His successor, Brezhnev, enacts some treaties to lessen the chance of war with the U.S., but suppression continues enforced by a class of entrenched bureaucracy. Russia rebuilds from the rubble of World War II into the second most powerful country after the U.S. Its effort to guarantee the people's everyday needs has its bright side and its dark side. After Brezhnev, a new leader emerges who becomes a crucial figure in Russian history, Mikhail Gorbachev. His goals are reform and openness while maintaining a socialist society and dealing with the U.S. He plays a positive role in ending the Cold War. He bears the burden of the rapid collapse of Communism, which he did not intend. Boris Yeltsin takes power and applies the shock therapy of the free market and a move to unfettered capitalism. It is mostly a disaster. Life for the average Russian becomes harsher because of loss of guaranteed benefits. Widespread corruption. A few become wealthy from acquiring state property. Vladimir Putin becomes leader in 1996, yet major elements of dictatorship remain. Growth of ultra-nationalism and increase in anti-Semitism. The issue of the safety of nuclear power. Russia's brutal actions in Chechnya and Afghanistan. Russia is an unfinished story. Will it become a new dictatorship? --a major world power? --a liberalized potential for creative life? (37.36.00) = England. Victorious in World War II but much weakened. The Labor Party comes to power after the war ends in 1945, remaining until 1951. Ushers a golden age for the average worker with universal health care and employment benefits. Power shifts back and forth between Labor and Conservative governments. Collapse of the British Empire in the 1940s and 1950s is hard to accept. The Suez Canal crisis with Egypt in the 1950s. Economic growth and the welfare state continue. England comes to grips with being second-fiddle to the U.S. Margaret Thatcher's Conservative Party rules in the 1980s, is a parallel to the Reagan years during the same period. The government takes no responsibility for large numbers of workers displaced by technology, especially in the heavily industrialized north, and the workers suffer greatly. This is now a free market period of unfettered capitalism. The Falkland Islands War with Argentina is a British show of international force. The Labor Party is back in power with Tony Blair who moderates the conservative years of Margaret Thatcher, but is to the right of traditional Labor. England's relationship with U.S. and Blair's strong support of the U.S. invasion of Iraq. Scotland, which becomes part of the U.K. in the 1700s, is granted more autonomy in response to rising Scottish nationalism. Wales, with its distinct ethnicity and language also exerts nationalistic pressures. (48.38.00) = Ireland. Its long history is scarred by excessive tragedy. Ireland remains neutral during World War II. Ireland's literary tradition. Continued impoverishment and loss of population. The country remains mostly rural outside of Dublin. North Ireland, which has been Protestant since the 1600s, is divided from Ireland, generating ongoing violence. This conflict is based on class as well as religious hatreds. Prospects for conciliation are uncertain. Ireland is modernizing despite the Church's traditional resistance to change. There is economic progress in the technical area. Irish youth are now more willing to stay, mainly in the cities where economic development is happening. These changes are helping Ireland to better take its place in Europe and the world. (51.02.00) = Major Issues in Modern Europe. Immigration: A response to extreme poverty. Although wage scales may lower in the host countries, immigrants see it as an improvement in their lives. Traditionally they work hard to help families left behind. They bring different ethnicities, traditions, and values. Clashes in host countries are based on xenophobia. European business want immigrants as cheap labor. Immigration is a source of ongoing struggle and problems. (55.52.00) = European Union: The need to create an economic bloc to compete with the U.S. as the one superpower. Problems include nationalism and economic conflicts. Barriers from the Cold War affect the role of East European countries with their sense of fear and uncertainty. Yet, there is also a sense of hope.