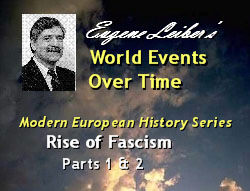 Rise of Fascism. Extreme Capitalism: Bitter Aftermath of World War I. . In Italy and Germany, an ultra-nationalism emerges, with a sense of superiority to other nations. The nature of totalitarianism and the all-powerful leader. Hitler takes power in Germany legally in 1932. Why fascism, an extreme and violent capitalism, finds support in the insecurities of contrasting segments of society emerges and continues throughout WWII. (11.11.00) = Why the U.S. and England Do Not Turn Fascist. Although significant pro-fascist elements exist in both countries, communist and socialist parties are not mass parties and, therefore, are not threatening (12.12.00) = Anti-Semitism. Exploitation of ancient European Anti-Semitism. The Jew as scapegoat. Incremental marginalizing and isolation. The ""final solution."" Homosexuals, gypsies, and mental defectives are also targeted for extinction. The Holocaust requires great organization and support, often with the complicity of occupied countries. The pseudo-science of aryanism. Unimaginable medical experiments on humans. Violence and death are the ultimate results of fascism..
(28.36.00) = France, although a victor, has not recovered from 4 years of war. The Socialists come to power whose minister is Leon Blum, a Jew. Reflecting French anti-Semitism, many French say, “Better Hitler than Blum.” (44.00.00) = England. In the face of growth of the labor unions and major strikes, the upper class share the anti-Semitism associated with the Nazi party. (45.49.00) = Prelude to War. The new republic elected in Spain, is resisted by the military and the church, and leads to civil war from 1936 to 1939. A moral opportunity to stop fascism is lost. Germany supports the fascist side; the U.S. and England remain neutral, partly explained by the world memories of the horrors of World War I. (55.48.00) = Appeasement based on the fear of war and desire to avoid it actually helps precipitate it. Hitler brilliantly manipulates the West's fears of Russia and other concerns to his advantage. The motivations behind the August 1939 Non-Aggression Pact between the two bitter enemies, Germany and Russia, which is a stunning shock

Rise of Fascism (continued). World War II starts. Germany moves against Poland September 1, 1939 and most of the continent falls under the German blitzkrieg in the spring of 1940. England stands alone, London endures an air blitz, but there is no invasion. June, 1941 an all-out Nazi invasion of Russia pushes deep inside the country weakened by Stalin's earlier purge of his best generals. Churchill, a staunch anti-communist, supports Russia as a practicality. Japan joins the Axis powers and America is at war after the December 7th, 1941 attack by the Japanese on Pearl Harbor. (9.30.00) = The Second Front.. Russia is fighting 80% of the German army. Why Russia's calls for a second front to relieve its desperate situation, in 1942 and again in 1943 are refused by Churchill. Why Allied invasions of North Africa and Italy do not shorten the war. (14.21.00) = The Turning Point. The Russian victory at Stalingrad is a turning point in the Allied view that winning the war is now possible, and the Normandy invasion is launched on June 6, 1944. Why Nazi planes and vehicles are found grounded. The last crisis of the Battle of the Bulge in 1944-45 and the final push to end the war in Europe in May 1945 (19.12.00) = Russia invades Manchuria. Russia's justification to declare war on Japan and invade Manchuria 2 days prior to the U.S. dropping of the atom bomb on Japan. Another strategic reason for the U.S. using the bomb against Japan not related to ending the war with Japan. (25.15.00) = Origins of the Cold War. Russia's Post-War Relations With the U.S. . Stalin appears to choose the middle position of insisting on friendly borders for itself, not the soft position of needing U.S. help after the war, and not the hard position of no cooperation with the U.S. because world communism must go forward. This view is supported by what it does with Manchuria after it strips it of its industry, and its guidance to well-organized communist parties in Greece, Italy, and France, and its guidance to the Chinese Communists during its civil war fight. Russia's resistance to the possibility of fascist factions gaining control in a free election in Poland is consistent with its insisting on friendly borders (36.38.00) = The Post-War U.S. Relations With Russia. The U.S. fears falling back to a depression with the end of a war economy. The fear of war with Russia maintains a war economy. Senator McCarthy and the ""red scare"" with the resulting mass hysteria starts with the Truman Administration. Later, Republicans blame Democrats for losing China, Russia getting the atom bomb, and the Korean War. The Cold War has a significant impact on recovery in Europe and the post-war direction of its countries.