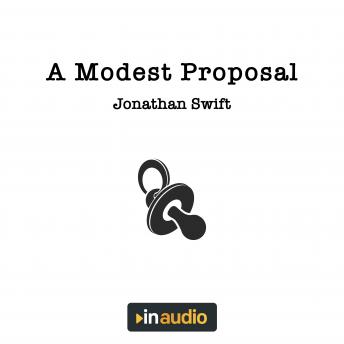 Experience one of the most jarring and influential satirical essays in this InAudio production of A Modest Proposalby Jonathan Swift.In one of the most well-known works of satire, Jonathan Swift puts forth a “modest proposal.” Swift begins by outlining the suffering that the starving beggars in Ireland experience daily. He paints a grim picture of the plight these people face to help the reader relate to the situation, before turning the tables and suggesting that to alleviate the economic troubles of the poor, their children could be sold as food to the upper class. The shock from this sudden change is expounded by Swift’s continued explanation of the proposal, including cooking instructions and analysis of the economic benefits to eating children.This work of irony and satire was written to draw attention to the subhuman treatment of the poor people by the upper-class citizens of Ireland, but the satirical messages are still impactful to the modern reader.