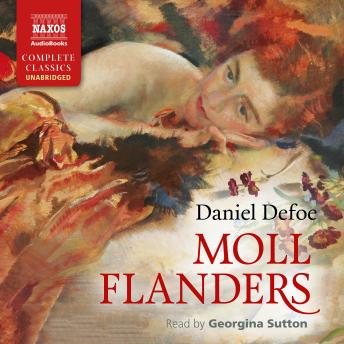 The original title says it all: 'The Fortunes and Misfortunes of the Famous Moll Flanders, who was Born in Newgate, and during a Life of continue'd Variety for Three-score Years, besides her Childhood, was Twelve Year a Whore, five times a Wife (whereof once to her own Brother), Twelve Year a Thief, Eight Year a Transported Felon in Virginia at last grew Rich, liv'd Honest, and died a Penitent.' So begins Moll Flanders, Daniel Defoe’s honest portrayal of one woman’s
struggle for economic survival in an unsympathetic world. Told with
uncompromising directness and an extraordinary empathy, it is, as Virginia Woolf
once claimed, ‘one of the few English novels we can call indisputably great’.

Remarkably up to date and recognisable in behaviour, emotions and thought. More than three centuries of difference have apparently not made Daniel Defoe incomprehensible. Very clear window into a network of people we can almost 'touch' with our senses. The narrator has certainly kept this window as open as can be.

What wonderful command of the art of narration to the highest degree of proficiency. I commend this reading to all who appreciate the true art of narration at it's very best. Get this book and absorb your mind in true listening delight.