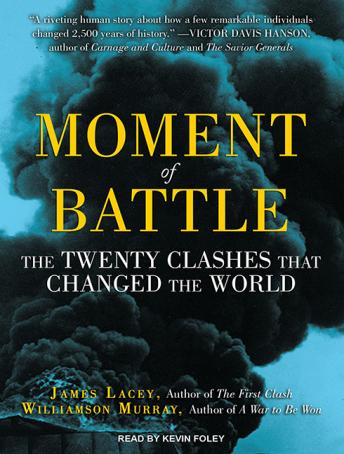 Moment of Battle: The Twenty Clashes That Changed the World

In the grand tradition of Edward Creasy's classic Fifteen Decisive Battles of the World, James Lacey and Williamson Murray spotlight only those engagements that changed the course of civilization. In gripping narrative accounts they bring these conflicts and eras to vivid life, detailing the cultural imperatives that led inexorably to the battlefield, the experiences of the common soldiers who fought and died, and the legendary commanders and statesmen who matched wits, will, and nerve for the highest possible stakes.

From the great clashes of antiquity to the high-tech wars of the twenty-first century, here are the stories of the twenty most consequential battles ever fought, including

Marathon, where Greece's 'greatest generation' repelled Persian forces three times their numbers-and saved Western civilization in its infancy
Adrianople, the death blow to a disintegrating Roman Empire
Trafalgar, the epic naval victory that cemented a century of British supremacy over the globe
Saratoga, the first truly American victory, won by united colonial militias, which ensured the ultimate triumph of the Revolution
Midway, the ferocious World War II sea battle that broke the back of the Japanese navy
Dien Bien Phu, the climactic confrontation between French imperial troops and Viet Minh rebels that led to American intervention in Vietnam and marked the rise of a new era of insurgent warfare
Operation Peach, the perilous 2003 mission to secure a vital bridge over the Euphrates River that would open the way to Baghdad

Historians and armchair generals will argue forever about which battles have had the most direct impact on history. But there can be no doubt that these twenty are among those that set mankind on new trajectories. Each of these epochal campaigns is examined in its full historical, strategic, and tactical context-complete with edge-of-your-seat you-are-there battle re-creations. With an eye for the small detail as well as the bigger picture, Lacey and Murray identify the elements that bind these battles together: the key decisions, critical mistakes, and moments of crisis on which the fates of entire civilizations depended.

Some battles merely leave a field littered with the bodies of the fallen. Others transform the map of the entire world. Moment of Battle is history written with the immediacy of today's news, a magisterial tour d'horizon that refreshes our understanding of those essential turning points where the future was decided.