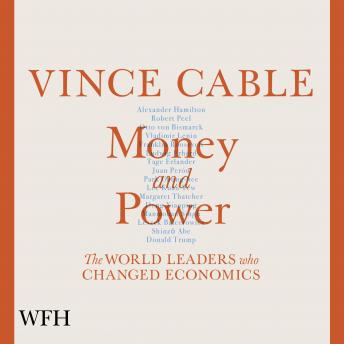 Money and Power: The World Leaders Who Changed Economics

A captivating economic history of government all over the world.

Through economics, our politicians have the power to transform people's lives for better or worse. Think Deng Xiaoping who lifted millions out of poverty by opening up China; Franklin D Roosevelt whose 'New Deal' helped the USA break free of the Great Depression. Or Peron and his successors in Argentina who brought the country to the brink of ruin.

In this magisterial history, economist and politician Vince Cable examines the legacy of 16 world leaders who transformed their countries' economic fortunes and who also challenged economic convention. From Thatcher to Trump, from Lenin to Bismarck, Money and Power provides a whole new perspective on the science of government. Examining the fascinating interplay of economics and politics, this is a compelling journey through some of the most significant people and events of the last 300 years.

"Vince Cable brings economics to life in this thrilling history, revealing how 16 leading politicians over the last 250 years have used it in their own totally different ways to make the world anew." SIR ANTHONY SELDON, author of May at 10

"A wonderful journey through the economic ideas that have shaped leading politicians throughout history." DAME MINOUCHE SHAFIK, Director of LSE

"From Hamilton and Lenin to Abe and Trump, these brilliant essays are true to the dictum that 'people don't believe in ideas, they believe in people who believe in ideas'. This is a book which will change the way you think about politics and the leaders and ideas which have driven it forward in the last three centuries." LORD ANDREW ADONIS

"Vince Cable brings out with spectacular clarity how important and radical leaders end up combining economic theory, political ideology and practical administration. This book needs to be read by anyone who is interested in how the world's economies are really run." SIR OLIVER LETWIN

"Money and Power provides a masterly analysis of how economic policy has determined the success and failure of political leaders through the ages." VICKY PRYCE, former Joint Head of the UK Government Economic Service

"As a former policymaker, Cable has an eye for the sort of political detail that brings a historical episode to life. It's an accessible read that helps us see the long-standing links between money and power all over the world." LINDA YUEH, author of The Great Economists: How Their Ideas Can Help Us Today

"Cable shows the influence of leaders in the course of history and the influence of economic ideas on their thoughts and actions. A brilliant project and splendidly delivered." PROFESSOR LORD NICHOLAS STERN, LSE

"A fast-paced, highly readable account of political leaders who transformed their countries - for better or worse - through the economic ideologies of their time. As an economist turned politician, Vince Cable is uniquely placed to provide a critical, but fair judgment of those who have shaped today's major economies." DAME DEANNE JULIUS, senior adviser, Chatham House

Money and Power: The World Leaders Who Changed Economics