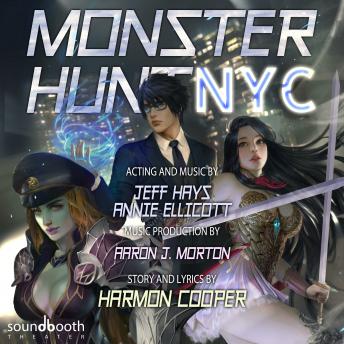 At least for those who have the illegal Monster Hunter app, like musician Chase Knowles.

Through the app, Chase becomes the Alpha to two powerful Huntresses: a sexy half-dragon whose combat prowess is matched only by her mouth, and a dangerously beautiful warrior with two killer blades and an insatiable appetite for… reading.

Avoiding arrest for long enough to earn some money is at the top of their To-Do list, but there’s a sinister reason the app has been banned… And Chase isn’t the only one playing with fire.

Warning: Monster Hunt NYC is a full audio drama that contains a light harem, augmented reality, fantasy violence, a ton of action, and GameLit and LitRPG concepts. It was inspired by the Persona games, Pokemon Go!, and Scott Pilgrim vs. the World.