Monsters, Gods, and Heroes: Approaching the Epic in Literature 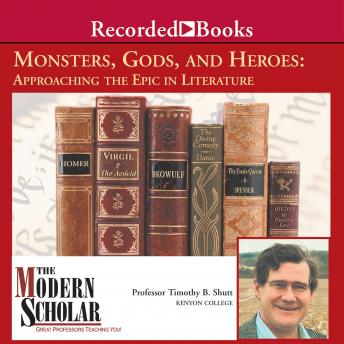 From the very outset in the West-from the time of Homer himself in about 750 BCE-the epic has been the most highly regarded of literary genres. It is rivaled only by tragedy, which arose a bit more than two centuries later, as the most respected, the most influential, and, from a slightly different vantage point, the most prestigious mode of addressing the human condition in literary terms. The major epics are the works that, from the very outset, everyone had heard of and everyone knew, at least by reputation. They are the works that had the most profound and most enduring cultural influence. And they are very much with us still, some more than others, but all-or all the most successful ones-are more or less firmly enshrined in cultural memory. They are still read. They are still taught. They still gain imitators and admirers. The stories they tell still shape our imagination and aspirations. In this course, we will revisit the epics, examining the stories told and the characters. We will consider the various styles represented and the societies in which these epics were constructed. Finally, we will arrive at an understanding of the epic as a genre and as a reflection of ancient history.

Monsters, Gods, and Heroes: Approaching the Epic in Literature

This title is due for release on September 26, 2008
We'll send you an email as soon as it is available!