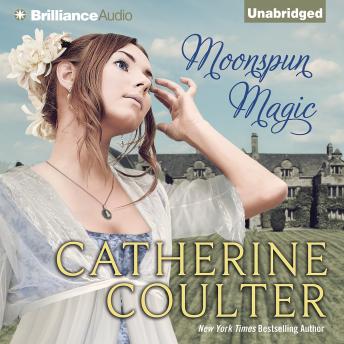 Dear Listener: Moonspun Magic is the third book in the series, first published in 1988. You've already met Rafael Carstairs, the mysterious sea captain who worked against Napoleon in Calypso Magic. He's a civilian now and traveling to see his twin brother, Damien Carstairs Baron Drago, in Cornwell. In the middle of a moonless night, Rafael rescues a young girl, Victoria Abermarle, from smugglers, only to find that she's trying to escape his twin, Baron Drago, who tried to rape her. What's a retired spy to do with a young girl whose nubile body and sizable fortune are threatened by his own brother? He does the noble thing, finally. He marries her. And that's just the beginning of their adventures... Step into this whirlwind of intrigue, shattering secrets, and black-souled villains that sets brother against brother and pits good against evil. Revisit all the characters from the three Magic novels and see what mischief they've been brewing since Midsummer Magic kicked things off in 1810 Scotland. Write and tell me which of the Magic novels you like the best. Do enjoy all of them. Catherine Coulter