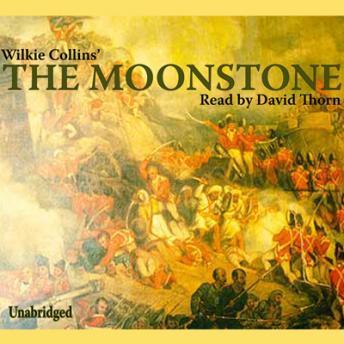 Claimed as the first detective story in the English language, Wilkie Collins weaves his classic mystery through a series of narratives by various characters in the book who had first hand knowledge surrounding the disappearance of a large valuable yellow diamond (the Moonstone) from the room of its young owner, Rachel Verinder. Miss Verinder was bequeathed the diamond by a ne'er-do-well uncle who looted the jewel from the statue of the Hindu Moon God during the siege of Seringapatam-since which, Hindu Priests were bound and determined to recover the diamond and return it to its rightful place in the forehead of the statue of the god.

AUTHOR
Wilkie Collins
William Wilkie Collins (1824 - 1889) was a very popular Victorian novelist and a close friend and collaborator of Charles Dickens. Collins was a prolific writer, publishing not only novels, but many plays, short stories and works of non-fiction.

The son of a successful landscape artist, Collins developed a early interest in storytelling to disarm bullies at boarding school. As a child, Collins lived and traveled throughout Europe, and to please his father, became a lawyer. All major influences on his writing.

Collins sold his first short story at 19, his first novel at 24. Collins had a very successful career as a master of suspense with a distinct narrative voice, filled with social commentary. Wilkie Collins never actually practiced law, but his knowledge profoundly impacted his writing and he is considered one of the godfathers of the ""Detective Novel"".

COMMENTARY
Reviews for Alcazar AudioWorks' production of The Moonstone
My mom read The Moonstone in the 20's and I have read it several times... but this version read by Mr. Thorn was pure enjoyment.... It is a very long story, along the lines of the Cantebury Tales, but being a classic the plot has been duplicated in modern movies.... viewpoints of various witnessess.... that is what makes a true classic: It withstands all the duplication, and remains wonderful. Thank you for presenting it to us.
Listener Review - Audible.com

""What a mystery should be.""
After listening to The Woman In White, I was anxious to see if this could meet that standard. I enjoyed this story even more. The characters in The Moonstone were more ""real"" to me. Even though there were two very minor blips in the editing of the narration, the narration itself was excellent. I gave a lot of thought in this selection since there are several editions of this book and was never disappointed in David Thorn's performance. If you like mysteries, I would highly recommend this selection.
Listener Review - Audible.com
"