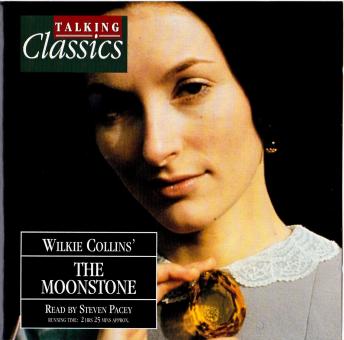 Hailed as a masterpiece on publication, The Moonstone still thrills as a supreme detective story. But it is also a novel of mounting suspense, as the action follows the Moonstone's trail. The gem is tracked from the bloody looting of Seringapatam to the peaceful heart of England and on to the grim slums of London's East End. By skilfully using separate narrators with their differing viewpoints, Wilkie Collins deepens the mystery. Even the great Sergeant Cuff makes a false deduction. The fate of the Moonstone remains uncertain until the final revelation.
1. A CURSED JEWEL. Stolen by the Emperor Aurungzebe from its shrine at Somnauth, the Moonstone is followed by three Hindi priests and carries a curse. At the siege of Seringapatam John Herncastle, a British solider, seizes it and later bequeaths it to his niece Rachel Verinder. Franklin Blake, Rachel's cousin, is charged with delivering it on her 18th birthday. Three Indians precede him, alarming the house steward Betteredge. Franklin decides to put the jewel in a bank and not tell Rachel about her legacy just yet.

2. A FATEFUL BIRTHDAY. Franklin and Rachel fall in love, leading Rachel to reject an earlier suitor, Godfery Ablewhite. At a dinner party held to celebrate her birthday, the Moonstone is presented to her. During dinner Franklin quarrels about medicine with Mr Candy, a doctor; then a drumming is heard outside. The Indians have returned and see that Rachel has the jewel. They are warned off and Betteredge carefully locks the house and lets the dogs loose. Rachel, unaware of the danger, insists on keeping the jewel in her room.

3. THE MOONSTONE VANISHES. The next day, the diamond has disappeared, although the house remains locked. Rachel will say nothing about it and Franklin sets off to have the Indians arrested. However, they turn out to be innocent and the local police arrive, led by Sergeant Seegrave. They prove useless and it is decided to call in a well-known detective, Sergeant Cuff. When he arrives, Cuff is unlike any policeman Betteredge has ever known. Rachel emerges from her room only to berate Franklin, leading Cuff to conclude that she has taken the jewel.

4. A DETECTIVE'S MISTAKE. Betteredge cannot accept Cuff's deduction, but the Sergeant is confirmed in his suspicions when Rachel insists on leaving the house and also spurns Franklin again. Cuff explains his theory to Lady Verinder, who refuses to accept it. She does, however, agree to confront her daughter with his accusation. After doing so, she repeats her conviction that Rachel is innocent and dismisses Cuff. Before leaving, Cuff tells Betteredge the name of the only moneylender who can handle the stolen gem: Septimus Luker.

5. THE UNBELEIVABLE TRUTH. Returning to England on the death of his father Franklin Blake attempts to see Rachel but is rebuffed. Baffled, he visits the lawyer Bruff, who agrees to let him see her alone in Bruff's own house. When Franklin confronts Rachel, she tells him that she saw him take the Moonstone. Astonished, Franklin can offer no explanation for an action he cannot remember. Rachel explains how she saw him remove the stone. Franklin is even more perplexed; they part in anger and distress.

6. A DISASTROUS JOKE. Returning to Frizinghall, Franklin calls on Mr Candy and finds the doctor has been severely ill and cannot speak lucidly; he had collapsed after Rachel's party. His assistant Ezra Jennings, however, reveals he has pieced together Candy's rumblings and discovered a crucial fact: to prove the power of medicine, Candy drugged Franklin with laudanum to make him sleep that fateful night. Jennings suggest that Franklin took the jewel while drugged. Franklin agrees to Jennings' suggestion of conducting a second experiment with laudanum.

7. ALL IS CLEAR. Watched by Rachel and Bruff and under the influence of laudanum, Franklin repeats his actions in taking a mock diamond from the cabinet, but falls asleep before he can reveal what he did with it. Rachel is reconciled to him and Franklin accompanies Bruff to London in pursuit of the Moonstone. There they observe Luker and a dark-skinned sailor at Luker's Bank. Bruff's scout Gooseberry follows the sailor to an East End inn, then returns to fetch Franklin. Together with Sergeant Cuff, who now has a hunch about the thief, they set out for the inn, but arrive too late to save the sailor from murder. Cuff reveals the sailor to be Ablewhite, as he had foretold.

8. JUSTICE EAST AND WEST. Cuff reports that Ablewhite had embezzled money, partly to support a mistress. Franklin, drowsy with laudanum, had given him the jewel and remembered nothing about it the next morning. Ablewhite had seen a chance for the perfect theft. But the Indians followed him to reclaim the jewel. Finally, the Moonstone is restored to Somnauth temple.