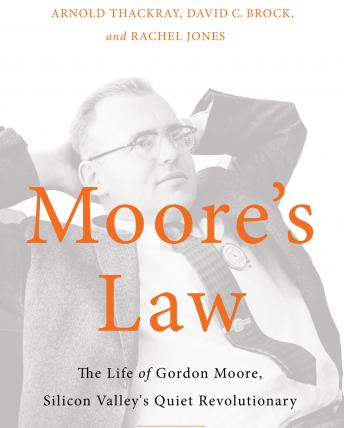 Our world today-from the phone in your pocket to the car that you drive, the allure of social media to the strategy of the Pentagon-has been shaped irrevocably by the technology of silicon transistors. Year after year, for half a century, these tiny switches have enabled ever-more startling capabilities. Their incredible proliferation has altered the course of human history as dramatically as any political or social revolution. At the heart of it all has been one quiet Californian: Gordon Moore.

At Fairchild Semiconductor, his seminal Silicon Valley startup, Moore-a young chemist turned electronics entrepreneur-had the defining insight: silicon transistors, and microchips made of them, could make electronics profoundly cheap and immensely powerful. Microchips could double in power, then redouble again in clockwork fashion. History has borne out this insight, which we now call "Moore's Law", and Moore himself, having recognized it, worked endlessly to realize his vision. With Moore's technological leadership at Fairchild and then at his second start-up, the Intel Corporation, the law has held for fifty years. The result is profound: from the days of enormous, clunky computers of limited capability to our new era, in which computers are placed everywhere from inside of our bodies to the surface of Mars.

Moore led nothing short of a revolution. In Moore's Law, Arnold Thackray, David C. Brock, and Rachel Jones give the authoritative account of Gordon Moore's life and his role in the development both of Silicon Valley and the transformative technologies developed there. Told by a team of writers with unparalleled access to Moore, his family, and his contemporaries, this is the human story of man and a career that have had almost superhuman effects. The history of twentieth-century technology is littered with overblown "revolutions." Moore's Law is essential reading for anyone seeking to learn what a real revolution looks like.