Morality Made Me an Atheist: Calling BS on William Barr, the Attorney General of the United States of America 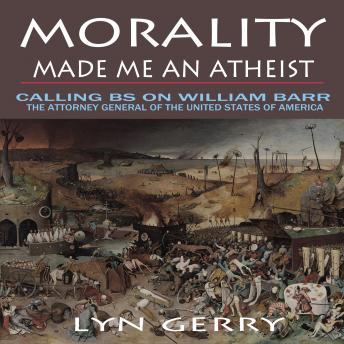 I was seven years old when I realized that I did not believe in God, or that at the very least, something was not right about the whole thing. It wasn't that the stories in the Bible contradicted science. I was perfectly willing to believe in a talking snake. Some of the things God said and did made no sense, and some of the things God did were just plain mean. Either God wasn't all powerful, or God was not good. Or, God wasn't there. I ultimately decided the latter was true. It was morality that made me atheist.

My purpose is not to debate the existence of God. You either believe or you don't. This book is about values.

There are those, such as the former Attorney General of the United States, William Barr, who assert that not only is morality impossible without God, but that belief is required to be a citizen of a democracy! Their project is to use the law to force their religion upon the growing number of those of us who want no part it.

There are impossible things, but atheist morality is not one of them. Every moral decision ever made, by any person in all of time, was made in the absence of God.

This is my testimony.

Morality Made Me an Atheist: Calling BS on William Barr, the Attorney General of the United States of America