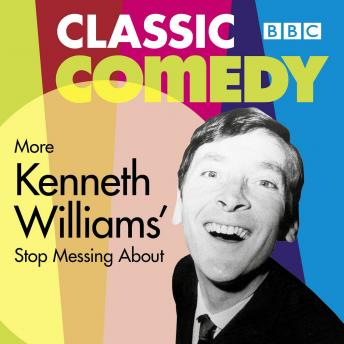 Join Kenneth Williams, Hugh Paddick and Joan Sims as they go beyond Round the Horne. Taking over the mantle of Round the Horne, Stop Messing About carried on the comedy tradition, which reunited Kenneth Williams with both Hugh Paddick and Kenneth's Carry On co-star, Joan Sims. These four episodes include such favourites as crusty old judge Sir Inigo Parchmutter, Crackerjackanory With Mother, more visits to Tolpurgis Hall, as well as a couple who bear a bona similarity to Julian and Sandy. With much vada-ing and some wonderful film adaptations, such as A Fistful of Denaro and Oliver Stick, Stop Messing About is packed with outrageously funny sketches, parodies, double entendres and saucy songs. Stop Messing About - the first all-nude radio show. Nervous listeners are advised to keep their eyes closed - and it s forbidden to take photographs.