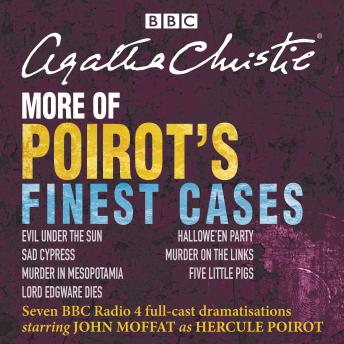 Evil Under the Sun: On holiday in Devon, Poirot becomes embroiled in the murder of a glamorous American starlet.

Sad Cypress: A poison pen letter begins a chain of events which is to end in tragedy.

Murder in Mesopotamia: When death occurs at an archaeological site in the Iraqi desert, Poirot is on hand to dig for clues.

Lord Edgware Dies: Lord Edgware is found brutally stabbed, his wife the prime suspect. But did she murder him?

Hallowe’en Party: The sleuth investigates the death of a girl drowned in an apple-bobbing tub on All Hallows’ Eve.

Murder on the Links: Summoned urgently to France, Poirot finds his wealthy client dead. Can he trace the killer?

Five Little Pigs: A bride-to-be hires Poirot to solve a sixteen-year-old case and prove her mother innocent of murder.