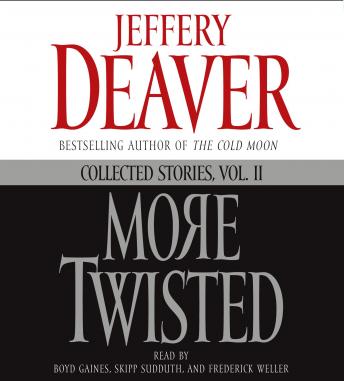 While best known for his twenty-four novels, Jeffery Deaver is also a short story master—he is a three-time recipient of the Ellery Queen Reader’s Award for Best Short Story, and he won the Short Story Dagger from the Crime Writers Association for a piece that appeared in his first short story collection, Twisted. The New York Times said of that book: “A mystery hit for those who like their intrigue short and sweet…[The stories] feature tight, bare-bones plotting and the sneaky tricks that Mr. Deaver’s title promises.” The sneaky tricks are here in spades, and Deaver even gives his fans a new Lincoln Rhyme and Amelia Sachs story.

Deaver is back with sixteen stories in the tradition of O. Henry and Edgar Allan Poe. His subjects range from a Westchester commuter to a brilliant Victorian England caper. With these intricately plotted, bone-chilling stories, Jeffery Deaver is at the top of his crime-writing game.

This title is due for release on January 3, 2007
We'll send you an email as soon as it is available!