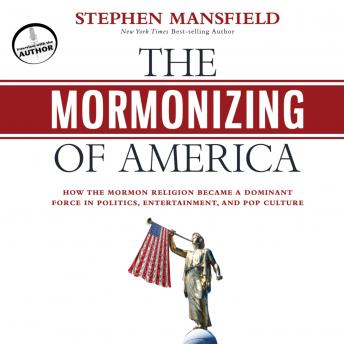 The Mormonizing of America: How the Mormon Religion Became a Dominant Force in Politics, Entertainment, and Pop Culture

What the Mormonizing of America means for the nation, the world—and for you. A century ago, there was one Mormon celebrity in the United States—a member of Congress so controversial, his confirmation hearing lasted four years. The Latter-day Saints’ practice of polygamy had ended only a decade or so before. Mormons were a despised sect with almost no standing or credibility in American culture. Today, Mormons number in the millions. Their members include some of the most prominent people in the world: the Marriott family; Stephen Covey; Mitt Romney; Glenn Beck; the Osmonds; Stephenie Meyer, author of the best-selling Twilight vampire novels; David Neeleman, founder of JetBlue; and more than a dozen members of Congress. In The Mormonizing of America, New York Times best-selling author Stephen Mansfield tells the story of the faith that has become one of the country’s most influential religions and how it has ascended to astonishing power in American society. In his fair and thought-provoking way, he also unveils what Mormons believe and why it matters for America, the world—and for you.

Mormonizing of America: How the Mormon Religion Became a Dominant Force in Politics, Entertainment, and Pop Culture