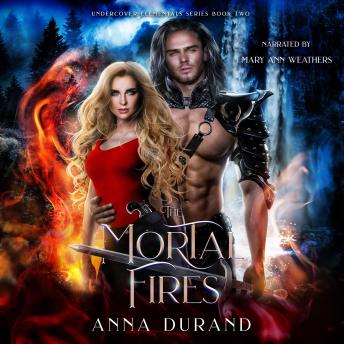 A pragmatic human gifted with powerful magic...
Lindsey Porter may be a mere mortal, but six weeks ago she proved she's a force to be reckoned with after destroying the mad king of the sylphs. Now she's stuck with magical powers she doesn't understand and isn't sure she wants. Worse, someone has begun kidnapping and murdering young women, all of whom bear an eerie resemblance to Lindsey.
An enemy fueled by stolen magic...
Someone with immense power has set his sights on destroying her immortal lover, Nevan. Lindsey will risk everything to unmask the perpetrator, yet discovering the truth will test Nevan and Lindsey's powerful, passionate bond like never before. As dire events converge on them, Lindsey's only hope for saving her lover and herself may lie in the ragtag allies they assemble to battle their most frightening enemy yet.
The Mortal Fires is the second book in the award-winning, bestselling Undercover Elementals series of paranormal romances.