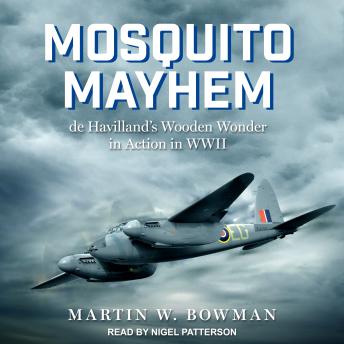 'The flak started about four or five minutes before the target and immediately it was apparent that it was intense and extremely accurate. Oboe entailed the pilot flying dead straight and level for ten minutes on the attack run. Suddenly a tremendous flash lit up the sky about fifty yards ahead of our nose and exactly at our altitude. Within a tenth of a second, we were through the cloud of dirty yellowish-brown smoke and into the blackness beyond. I shall never forget the spontaneous reaction of both my pilot and myself. We turned our heads slowly and looked long and deep into one another's eyes-no word was spoken-no words were needed.'

The Mosquito was probably World War II's most versatile combat aircraft. This book contains hundreds of firsthand accounts from many of the two-man crews who flew in them; pilots and navigators. It portrays the dramatic experiences of flying in its many roles as pathfinder, night fighter, reconnaissance aircraft, precision bombing, and low-level ground attack aircraft. It describes many of the RAF's most audacious raids on prime but difficult targets where carpet bombing by heavy bombers was likely to be ineffective and cause unnecessary casualties to civilians. It is a remarkable record of the aircraft and the men that flew them.