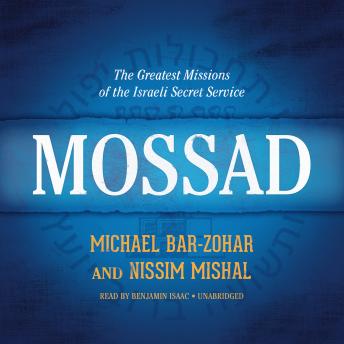 Mossad: The Greatest Missions of the Israeli Secret Service

The Mossad is widely recognized today as the bestintelligence service in the world. It is also the most enigmatic, shrouded insecrecy. In Mossad, authors MichaelBar-Zohar and Nissim Mishal take us behind the closed curtain with riveting,eye-opening, boots-on-the-ground accounts of the most dangerous, most crucialmissions in the agency's sixty-year history. These are real Mission: Impossible true storiesbrimming with high-octane action-from the breathtaking capture of Naziexecutioner Adolf Eichmann to the recent elimination of key Iranian nuclearscientists.
Anyone who is fascinated by the world of internationalespionage, intelligence, and covert black-ops warfare will find Mossad electrifying.

Mossad: The Greatest Missions of the Israeli Secret Service